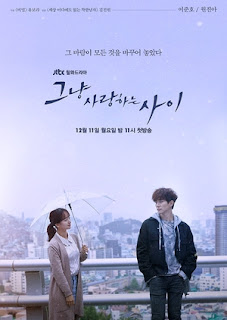 I haven't posted on this blog for a while because I have been contributing to another blog, Dramas With a Side of Kimchi. It has been fun to work on a larger blog and to contribute to group posts and interact with other bloggers. There probably won't be much here any more, but my Ides of March posts belong here still. Last year at the Ides of March cutoff, I was in the middle of three dramas which didn't get discussed then, so I'll begin with those. For the record, it's been five years since I began watching Asian dramas.

Chief Kim: Namgoong Min, who had been eating it up as a crazy villain, shows his funny side as a crooked accountant with a conscience. He is hired to cook the books for a large firm and then starts to feel sympathy for the employees who are being shortchanged. ****

Tomorrow With You: A man visits the future by riding on the subway and discovers that he needs to be married tp be happy. I looked forward to this one because of the actors, Lee Je-hoon from Signal and Shin Min-a from My Girlfriend is a Gumiho. Sadly it was a disappointment; the couple didn't click and the plot went nowhere. Questions about the other time traveler never get answered, although we do find out who he is. And if the guy can time travel because he missed the train explosion, why couldn't the girl do it as well? **

Forest of Secrets (aka Stranger): Perhaps my favorite drama of last year, this is a detective drama in which the characters are as good as the plot twists. A prosecutor (played by Cho Seung-woo) whose childhood brain surgery has curtailed his ability to access his emotions, opens up when he encounters a lively police woman (Bae Doona) who is perhaps his first real friend. They follow a twisted trail from a murder to uncover political corruption. *****

Father is Strange: I really enjoyed my first really long (52 episode) family drama. It is about a family who all love and support each other and yet all have secrets. We have someone living under an assumed name, someone keeping painful secrets from a lover, another person with a secret love affair, and one who is still haunted by being bullied. Lee Joon's acting was stellar. ****

Man to Man: Park Hae-jin stars as a secret ops agent who is infallible – the first half of the drama anyway. The story was entertaining at first but went downhill, and I didn't like the leading actress. **

Chicago Typewriter: This is a great show but you have to get a few episode in, and get to the 1930's part. I watched originally for Yoo Ah-in but dropped after a few episodes when I got busy. Then I picked it up again and got busy watching Go Kyung-pyo. This show jumps between the story of a modern-day writer being haunted by a ghost and the 1930's when the ghost was alive and the writer was in a previous incarnation. ****

The Package: The main charm of this story is the setting in France, where all the characters go on a tour. The tour guide is Lee Yeon-hee (from Miss Korea) and the guy on the tour who likes her but keeps getting into trouble is Jung Yong-hwa (from You're Beautiful and Three Musketeers). The interest is kept up by the other travelers, especially the sweet little Ahjumma who is coping with an illness and an irascible husband. ***

Because This is My First Life: Somewhat similar to the Jdrama We Married as a Job, this tells the story of a shy man who hires a woman to clean house for him and they start to like each other. It has a lame ending involving the woman waffling around. The best part is the fluffy white cat. ***

I'm Not a Robot: A man who is allergic to humans agrees to help test a lifelike android not knowing that the android has broken down and a real woman is impersonating it. Yoo Seung-ho and Chae Soo-bin were very cute, but the robot was intriguing and I thought they shortchanged it. *****

Just Between Lovers: This is not a show I had thought about ahead of time but really liked once we tried it out. Lee Joon-ho, who had been in Chief Kim, is great as the young man with PTSD who falls for a girl who survived a mall collapse with him. Won Jin-a is a newbie who does a great job as a young woman coping with survivors guilt and parents who can't move past the calamity. *****

I Am... : A robotics engineer leaves a lifelike android robot with his grown children and disappears. The daughter, a high school teacher, takes to the robot, calls it Annie, and enrolls it in her school. Cute. ***

As One: A movie about a pan-Asian table tennis tournament in which the North Korean and South Korean teams field a joint team. Based on a true story. ***

Nirvana in Fire: A Chinese historical fiction with 54 episodes. A young nobleman whose family and retainers are killed due to political infighting and treachery, spends years planning how to get the truth out and restore their honor. A few people who knew him from his youth help him; a man who now a general, his fiancee, and the widow of one of his officers. A royal prince and a couple of nobles who don't recognize him become his friends in his new identity and help him as well. ****

Sunshine: This tells the story of a young girl as she grows up, from her life in the countryside in the 1930's, to her years as a school teacher in World War II, and her married life with her in-laws in the years following. It is interesting to see how things change, and very strange to see the people at school cheer the news of Pearl Harbor. ***

Long Vacation: A young man is on the cusp of being a professional pianist. His roommate moves out to get married, but jilts the girl and disappears. The girl then shows up on the doorstep needing help, followed by her friends and brother. This stars Takuya Kimura, who was in Ando Lloyd. ****

Hero: Another Takuya Kimura drama, and quite humerous. He plays a prosecutor who investigates his cases in unorthodox ways. All the other staff feel he is way too casual and not serious enough, but he picks up on little hints in the cases that no one else notices and is able to solve them. *****

Go Teddy Go!: A short 4-episode drama about a magical teddy bear that speaks because someone's spirit is captured inside it. Silly. *

Gokusen: A young teacher doesn't want anyone at the school to know that she is the granddaughter of a yakuza boss. She overreacts from time to time but nevertheless is able to connect well with her more rebellious students. And although she is usually quite retiring, whenever anyone really gets into trouble, she is able to thrash the enemy. **

Atelier: A young woman's first job out of college is at an elite lingerie shop. The boss is pretty much the mean boss from The Devil Wears Prada. **

I am Reiko Shiratori: A rich arrogant girl tells a boy that he's not good enough for her and then tries to get him back. A light-hearted show mostly for pre-teen girls. **

Dad of Light: A man tries to reconnect with his father by playing Final Fantasy together, which they had done for a while when he was a kid. Based on a true story. ***

RyomaDen: A historical drama based on the life of Sakamoto Ryoma, who lived when Matthew Perry visited Japan. He saw the upheavel in Japanese society and worked to get his people to get along with each other and to modernize so they could cope well with the incoming foreigners. *****