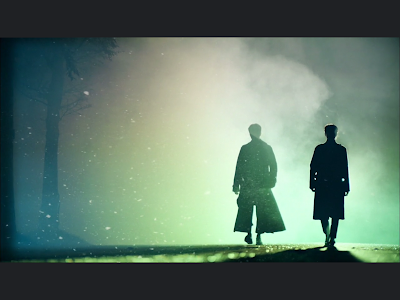 It's the Ides of March and time to review the year of Korean dramas. This week we not only have the Ides of March, but Pi day (apple pie this time) and St. Patrick's day as well. What a busy week! We have branched out into Japanese and Chinese dramas more, which I should write about sometime. We have briefly tried and dropped quite a few dramas this year, coasted along with some, and found a lot we really liked.  Rated out of 5 stars.

Baby-Faced Beauty: is the first one of the last year; Jang Nara plays a woman in her thirties who takes the place of her younger sister at a fashion company, and falls for a man her sister's age. She is good at her work, but has cultural troubles with dating a younger man. Amusing, but too many contests.***

Page Turner: a three episode mini-drama about high school pianists who compete with each other. Problems come from a stage mother and one of them becoming blind. Great acting, we will see rising teen actress Kim So-Hyun again. *****

Please Come Back Mister: Great plot idea, not quite well executed. Two middle-aged men (an office worker and an ex-gangster) die and get sent back to earth for a second chance to fix things. One becomes a handsome young man (Rain) who should not have hit on his (previous life) wife so much, and the other a beautiful young woman (Oh Yeon-Seo) who hilariously channels the gangster. The conductor on the train to heaven steals the show. ****

He Who Can't Marry: might as well be called He Who Can't Get Along With Anybody. Two 40-year olds become interested in each other: a female doctor (Um Jung-Hwa) and a male architect who seems to have Aspergers and can't relate to anyone. It all falls apart in the end. Watched it because Yoo An-In was in it. **

Ms. Temper and Nam Jung-Gi: an overbearing middle manager is hired to save a floundering company and develops a relationship with one of the employees and his little boy, who also live in her apartment building. Very cute scenes with her (Lee Yo-Won) and the little boy (Choi Hyun-Joon). ****

Drama World: an Australian kdrama fan is pulled inside her phone and becomes part of her favorite drama. Funny but cheesy, improves as it goes along. **

Oh My Lady: a woman (Chae Rim) becomes housekeeper for a popular actor who is very self-centered. When he finds out he has a five-year-old child (the adorable Kim Yoo-Bin), she has to help take care of her and he has to learn to become thoughtful and responsible. Very good character progression by Choi Si-won. ****

Bong Soon, a Cyborg in Love: a mini drama in which scientists develop a robot that they can market to be a perfect girlfriend. One of them falls in love with her. ***

Shining Inheritance/ Brilliant Legacy: When a businessman is thought to be dead, his wife kicks out her two stepchildren. The girl(Han Hyo-Joo) takes care of an injured old woman, who turns out to be wealthy and offers to give her company to the girl over the head of her slacker grandson played by Lee Seung-Gi. ***

Another Oh Hae-Young/ Another Miss Oh: A young man gets jilted at the altar. A year later he hears that his ex-fiancee is marrying someone else, and accuses the groom of graft and gets him arrested. However, the bride was someone else with the same name and the groom breaks up with her the day before the wedding without telling her why. Likeable guy, too shrill girl. He sees visions which don't get explained. ***

Squad 38/ Task Force 38: a tax collector gets help from con artists to run scams on tax evaders to get their taxes paid. Starts well, mostly very entertaining, somewhat weak ending. Great bromance with Seo In-Guk as the con man and Ma Dong-Seok as the tax collector. ****

Thumping Spike: short web drama. A pro volleyball player in the middle of a slump becomes a temporary high school coach and helps their team excel. **

Let's Fight Ghost: a college student (with a couple of comic sidekick friends) makes money by ghostbusting. He (Taecyon) comes across a girl ghost (Kim So-Hyun) who makes friends and  helps him. They discover that they can help some of the ghosts solve problems and pass on. A suspicious professor holds the secret of why the boy can see ghosts, and why the girl became a ghost.  Cute; memorable characters; the sidekicks were very popular. *****

W/ W-Two Worlds: A manga artist starts to go crazy when characters from his story come alive. His daughter (Han Hyo-Joo) is sucked into the manga world and falls in love with one of the characters, played by Lee Jong-Suk. Amazingly exciting beginning, but plot holes and general craziness lead to a weak ending. ***

Another Parting: mini drama - an alien is sent to Earth to find out why humans cry. **

Go Ho's Starry Night: mini-drama about five men in one office who like the same girl. **

Shopping King Louie: watched it for Seo In-Guk. Cute and fluffy but not convincing. He is an amnesiac who spends money like water and falls for a poor cheerful girl who forgives him everything. Nobody in this show seems to be able to think, even the villains are incompetent.  **

The K2: the saving grace of this show is Ji Chang-Wook's fight scenes and the beautiful background music. You can tell there is really no plot from the first few episodes which mainly consist of Yoona running around Spain in her nightgown. She plays the illegitimate child of a Korean politician who is trying to keep her a secret. He is the bodyguard. The most interesting character is the evil stepmother played by Song Yoon-A. **

1% of Something/ 1% of Anything/ Something About 1%: this is a remake and is much better than the earlier one, so be sure you watch the one made in 2016. A kindergarten teacher helps an elderly man who has fallen. He is impressed by her and makes his cold-hearted grandson date her in hopes that her kindness will rub off on him. Fun and cute. ****

The Beauty Inside: a movie. A man wakes up every day looking like a completely different person and has great difficulty having friends or a job. He is played by a lot of different actor and actresses. Very well done. ****

Tree With Deep Roots: a fictionalized story of how King Sejong (played by Han Suk-Kyu) developed hangul, the Korean alphabet. It begins when he is a child (played by a very cute teenage Song Joong-Ki) and his father King Taejong is a tyrant who kills anyone who threatens his position. A boy whose family is killed returns as an adult policeman to solve continuing murders. This drama takes place after the events of Six Flying Dragons, although it was made first. Very good, fun to spot actors in both shows, slow spot 3/4 of the way through. ****

Romantic Doctor, Teacher Kim: Han Suk-Kyu plays a doctor who is forced out by a corrupt official, changes his name, and works at a small country hospital. There he becomes a mentor for younger doctors played by Seo Hyun-Jin and Yoo Yeon-Seok (who are way better here than in their previous dramas Oh Hae Young and Warm and Cozy). *****

Goblin/ Guardian the Lonely and Great God: Gong Yoo plays an immortal goblin who helps deserving souls, and was in his previous life a general who was killed by the king. Lee Dong-Wook plays a grim reaper who doesn't remember his previous life. Though at first antagonistic, they become friends and are very cute together helping the goblin's bride (Kim Go-Eun) and his sister (Yoo In-Na). This was great both in atmosphere and in the characters. *****

Shows we are in the middle of watching; Chief Kim and Tomorrow With You. Also 30 episodes into Nirvana in Fire, which is Chinese.

Shows we tried and dropped so then 0 stars: Remember (the hero's super hearing was forgotten after two episodes and the villains kept walking over him); Grandpas Over Flowers Investigation Team (haphazard plot); Moorim School (they sent kids hiking in the middle of a wolf pack? really? their tests consist of a party?) Good Doctor (couldn't buy that someone with autism could be a doctor or get cured of it); Descendants of the Sun (couldn't take the weekly rescues of the heroine); High End Crush (can't remember anything about this one at all...); Haeundae Lovers (a story about a family of morons who do stupid things); Secret Message (couldn't figure it out at all); Sweet 18 (slow, a married couple lying to each other); Cinderella and Four Knights (aww Jung Il-Woo, you're supposed to be perky and cute, but I can't take six episodes of moping around); One More Happy Ending (too mindless); Mr. Baek (don't like the characters, the story is tanking); One Percent of Anything ( the one from 2003 which is confusing); Dear My Friends (couldn't take a whole episode of old ladies yelling and hitting each other); Legend of the Blue Sea (wanted to like a mermaid story, but just draggy except for the episode with the merman); Queen of Office (actually we watched this one out of focus and can't find it anywhere).