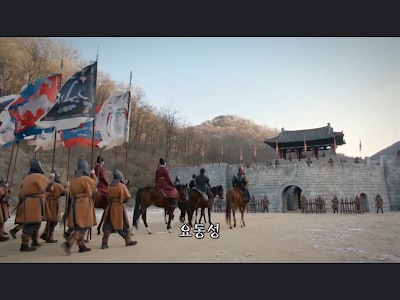 Madam Cho and Shin-Jeok are both tortured. She gets him to send out a message through one of the guards who is his friend. It's a ploy by Sambong to find Moomyung; Bang-Ji takes some soldiers and follow the person who picks up the letter. They find a house in the forest, but no one is there. Bang-Ji finds his mother in a nearby cave, however, and she tells him to leave Sambong or he will be fighting her.

Bang-Won asks to be investigated with Madam Cho so he can be cleared. Shin-Jeok figures out that Cho knows he had tricked her, so he strangles her to keep her from telling anyone. Sambong covers it up so it looks like suicide.

The Ming capture Japanese pirates who confess they are Joseon spies, and demand a prince be sent to explain. This would be dangerous, since the Ming have recently killed envoys and a lot of their own people. Sambong offers Bang-Won the choice of a five year exile or going to Ming. He admits Bang-Won is the only one who could convince the Ming Emperor and Bang-Won chooses to go: he will either be killed for his country or come home in glory. He tells Boon-yi to go to Banchon, where she will be safer.

Bang-Won takes Ha Ryun as translator and Moo-Hyul as bodyguard with a caravan of soldiers. They have to pass through Liaodong castle, but it has been closed to Joseon people and they are arrested. An officer in furs comes to call them barbarians and Bang-Won asks, “Do you want to die?” The officer is Zhu Di.

Historical note: Zhu Di was a son of the Ming emperor. He overthrows his nephew, the crown prince, and becomes emperor. Ha Ryun did not go to Ming; the translator was actually Jo Ban, whose lands were taken by Hong In-Bang in Episode 15. 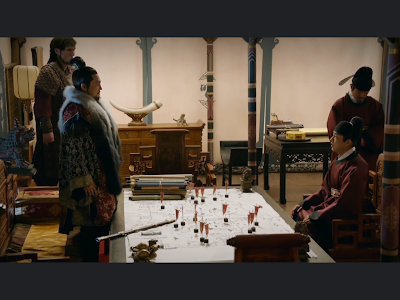 Zhu Di orders one of Bang-Won's arms cut off so Moo-Hyul breaks free, grabs a spear, and holds it to Zhu-Di's throat. Zhu Di suddenly admits he can speak Korean and calls his men off. But he says Moo-Hyul has to die for threatening him, and his guards have to die for not protecting him. Bang-Won negotiates an arena fight instead. Moo-Hyul wins, and when Zhu Di grants him a request, he asks that the guards not be killed. They will be more loyal after this.

Bang-Won tries to negotiate passage through Liaodong, but gets nowhere. That night there is a second meeting and Bang-Won, realizing that a big table map of Ming indicates that Zhu Di is planning a takeover, connects with him over the idea that they were both passed over as heir. He gets clearance to go if he leaves Moo-Hyul with Zhu-Di

While Bang-Won is gone, Moo-Hyul practices and becomes better at fighting, the poor ex-king gets ex-ecuted, the capital moves to Seoul, and Boon-Yi's people settle in at Banchon and catch a spy from Moomyung. One of the dead king's relatives is there under another name with Sa-Gwang and two of the king's children.


Sambong has a secret meeting in the forest which Boon-Yi overhears. He is starting a clandestine group of scholars. The country is a tree and the king is a flower on the tree. This group is Hidden Root and it is to guide the king and help the people.

Historical note: In 1394 the deposed king was killed as well as many of his clan. Bang-Won went to Ming in June and returned in November. In October the capital was moved to Seoul. 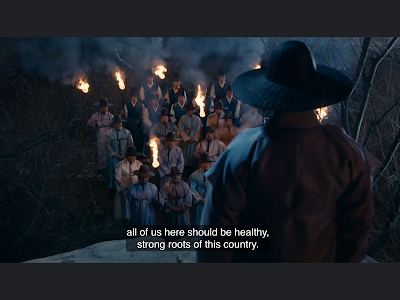 We resume with Sambong speaking several times to his secret followers. Bang-Won returns from Ming and is allowed to take Moo-Hyul home with him. Sambong tells Yeon-Hee she should return to private life, knowing Bang-Ji likes her.

Sambong plans to unify all the private armies into a national army. He has a ceremony which no one attends, so he tortures the officers. Meanwhile, Da-Kyung has hidden all their soldiers' weapons in a basement storeroom in Banchon. The dead king's children find an arrowhead there, and Sa-Gwang sees it.

Even though Bang-Won was a success in Ming and they granted travel permission, the nobles are angry because Ming thought he was the crown prince. Everyone else who went to Ming is tortured. These people are seriously heartless. The queen asks the king to protect the crown prince because she fears Bang-Won, but then Bang-Won makes a big scene and begs his little brother for forgiveness.
Ming claims that a recent letter from Joseon has insulted them and wants Sambong and the author handed over.

Historical note: The Ming did indeed call Bang-Won the crown prince but his prestige had grown so much that no one got angry about it. Lady Min did hide weapons, but no one knows where. The Ming Emperor demanded Jung Do-Jeon be handed over in June of 1396. The letter must have referred to his early life as a bandit and a monk, which would have infuriated him. 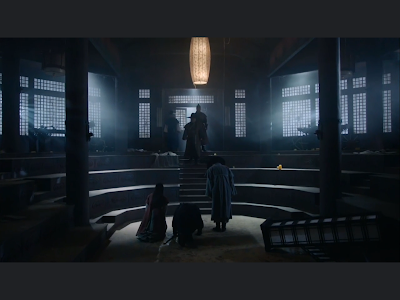 The king decides against sending Sambong to Ming because he has been planning to invade Liaodong and they might not take it well. Sambong resigns all his offices and leaves town.
Jo Mal-Saeng, the scholar who helped Bang-Won when his father was injured, enters Sungkyunkwan. A follower of Lee Saek, Kwon Geun, decides to switch sides and help, and so does Bang-Won's friend from school days, Shin-Jeok. The queen, very ill, tries before she dies to get Bang-Won to promise to protect the crown prince but he refuses.

Moo-Hyul catches Sa-Gwang looking around a storage shed belonging to his grandmother. It's the place where the children found the arrowhead, but she says nothing. A young girl overhears Boon-Yi and Bang-Won talking and reports to Sambong's brother, Jung Do-Gwang.

The king pretends to visit Biguk temple but secretly meets Sambong in the old parliament building. They plan the invasion; since the Ming Emperor is dying and there might be a civil war, this is their best chance. Yoon-Hee and Bang-Ji seem the friendliest we have ever seen them. Bang-Won looks for his father but meets Moomyung instead (when you hear owls you know it's them) and they tell him about the Emperor dying. He knows that Zhu Di will invade Ming.


Historical note: In January of 1395 Young-Gyu died of an illness, but he is still alive in the drama. The queen died in August of 1396. Jung Do-Gwang is fictional but he and the girl (as town leader) appear in Tree with Deep Roots. 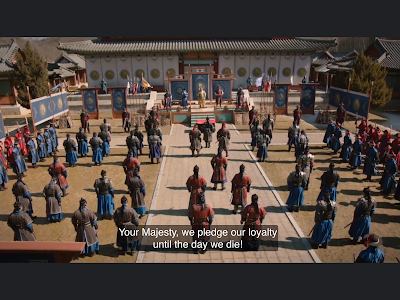 We begin with Sambong demanding the king start a war and Yeon-Hyang demanding Bang-Won prevent it. On the way back to Seoul, Sambong advises Yoon-Hee and Bang-Ji to get married, and we see Bang-Ji holding her arm and helping her walk because of her hurt ankle.

The king announces to the court that Ming has killed their envoys. This means war, so they will attack Liaodong. Ha Ryun and his aide Lee Seok-Beon are made commanders in two outlying provinces; they decide to raise soldiers for when the king abolishes private troops.

Bang-Won takes gifts to Sambong and Bang-Seok, the crown prince. This is what he had done with the three bullies he had killed in school. And then no one goes to the military training. The king demands the princes and officers show up for pardons, and while this is going on the private soldiers are rounded up and their weapons confiscated.

Young-Gyu goes to the storage shed and a small boy follows him and sees the weapons. It's the dead king's child, and just as Young-Gyu decides he can't kill a child, Sa-Gwang arrives and attacks. Young-Gyu's wild slash accidentally hits the boy fatally so Sa-Gwang kills him and takes the child away. Bang-Won is so distraught that Young-Gyu is dead that he vows to kill Sambong and Bang-Seok.

Historical note: The Ming Emperor killed Joseon envoys in1396.  The scene with Young-Gyu and Sa-Gwang is entirely fictional; this is just a more dramatic way for him to die.