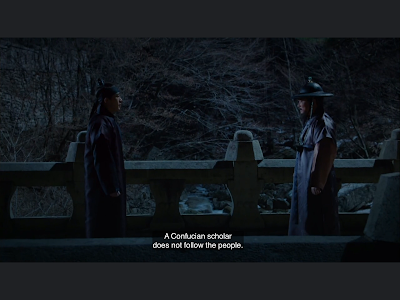 When it is dark Bang-Won leaves the house with Bang-Ji, Young-Gwa, and some red shirts. I mean guys with red headbands. Moo-Hyul finds out that they are gone, and knowing they will meet up with Cheok Sa-Gwang, chases after them.


Sa-Gwang feels a disturbance in the Force and sends Poeun on to the palace and waits. When Bang-Ji arrives she kills the red shirts right away and then tries to dissuade him. After a first skirmish she tells him she can't hold back because he's too strong, and they wound each other before Moo-Hyul arrives. He sees that she is preparing the strike she used to slice the palanquin and yells at Bang-Ji to avoid the blow. Then it is two against one until Moo-Hyul, dropping his sword, rushes her and they go over a cliff together.

Poeun and his servant proceed unmolested until they reach Seonjuk bridge, where Bang-Won is waiting. He tries to talk Poeun around and then Young-Gyu comes up with the mace and hits Poeun several times. Bang-Won has Sambong let out of jail and tells him Poeun is dead. The General is furious until Sambong convinces him they can only go forward and they have to accuse Poeun as a traitor.

Moo-Hyul comes to at the foot of the cliff and can't bring himself to kill Sa-Gwang. When she wakes up he is gone but has bandaged her wounds. When he returns later to check on her she comes from behind with a sword to his neck and asks what happened?

Historical note: The killing of Poeun took place in April in 1392, in the daytime. Bang-Won wasn't there at all; he sent Young-Gyu with some men to do it. Poeun was on a horse, Young-Gyu tried to hit him and then hit the horse. Poeun fell off and ran away, but the other men chased him down and actually killed him in the city street. Bang-Won challanges Sambong that there was never a place for him in the new country. He admits there wasn't until Bang-Won killed Poeun. We revisit Sa-Gwang with her sword to Moo-Hyul's neck, where he tells her that Poeun is dead and the king is still safe and will likely be dethroned. Sambong has Poeun declared a traitor and makes sure the General isn't blamed for his death. Yeon-Hyang tries to get Sambong to change his mind about land reform and gets nowhere.

Then King Gongyang is escorted out of town and General Yi and his wife Lady Kang are crowned as King Taejo and Queen Sindeok. The new king excitedly pushes through the first civil service exams only to be deflated when no one comes. Scholars keep disappearing and are finally traced to a village in the nearby mountains where they are hiding. Prince Bang-Won offers to persuade them to return, but after a short interchange he has the village set on fire. 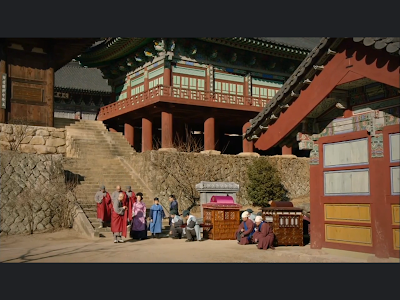 Bang-Won orders his archers to fire the village. Some scholars remain and die in the fire, but the rest run out and are arrested and left in jail without food for three days. When they are fed and let out they quietly go home and accept government jobs. One of them is Hwang Hui, who vows revenge.

King Taejo's oldest son, Bang-Woo, refuses to be crown prince. Jo Joon advises that Bang-Won be chosen instead because he has contributed so much. Sambong counters that he is the one son they should not choose because of his having killed Poeun.

The queen takes her youngest son, Bang-Seok, to have his fortune told by a monk and is told he has a great future only if he becomes king. The Kunoichi, now led by Yoon-Hee, catch one of Boon-Yi's villagers following the queen and beat him up. She complains and is told to send them all home.

Yeon-Hyang has a meeting of Moomyung leaders attended by the monk who did the fortune-telling. She later meets with Bang-Won to sponsor the youngest son as crown prince, which will create problems and then Bang-Won can step in as the obvious best choice.

Historical note: Hwang Hui was a very respected prime minister and shows up later in Tree With Deep Roots. Yi Bang-Woo went to live in a mountain hermitage and died of an illness in 1393. 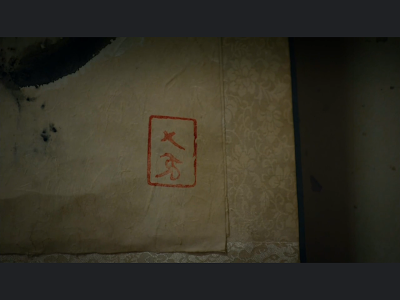 Sambong becomes prime minister and head of the army. Taejo names Bang-Seok as crown prince and publishes a list of people who contributed to founding the new nation. None of the older princes are on the list, but Moo-Hyul and Young-Gyu are promoted.

Yeon-Hyang tells Bang-Won that Moomyung began during Shilla times with a merchant network and he agrees to work with them. She decides to reactivate a group called Hwado (rice-sword) and sends Yooksan to Kanggye on the north border to meet them.

Sa-Gwang and the deposed king enjoy living in retirement, being friendly with the guards.

Sambong poses as a merchant and goes to the northern border to talk to Jurchen chiefs. He wants them to settle in Liaodong as allies when Joseon takes it back from Ming.  Da-Kyung has Boon-Yi send someone to follow him and report. Waiting for one of the merchants, Sambong sees a red stamp and finds the seal it's from.  Bang-Ji cuts it in half; they stamp the two parts together and it becomes the red stamp of Moomyung. The merchant who comes in is Yuksan.

Historical note: The older princes were actually left off the contributor's list; Bang-Won added them when he became king. Many Jurchens were ethnic Koreans who had moved there when they lost their land or during wars. Liaodong had once belonged to Goryeo and they kept trying to get it back. 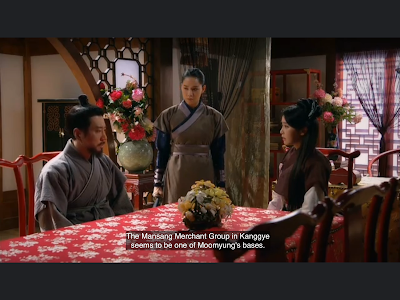 Sambong and Yuksan wonder how much the other knows. Sambong sends a report via Kunoichi but the teenager Boon-Yi sent filches it and hands it off to his companion. He is killed and the companion takes the body and the report home. Madam Cho realizes the seal has been used and she and Yuksan evacuate before they can be caught.

Boon-Yi calls Bang-Won and Sambong together to get them to reconcile, and when it fails, offers to sell the report. Sambong offers to let her people live in Banchan village and serve Sungkyunkwan, so she gives him the report. Bang-Won's school friend who has been working for Sambong all this time asks to work for him instead, but he is suspicious he is a spy.

Madam Cho receives a letter from Bang-Won and rushes to his house, but it wasn't from him; it was a forgery. Before she can leave Sambong arrives and finds them together, proving that Bang-Won is working with Moomyung. The king arrives and orders them arrested.

Historical note: Bang-Won was never arrested. Banchan was a village that provided food, books, and other services to Sungkyunkwan. It was independent and neither police nor army were allowed in.
Posted by Telzey at 7:12 PM