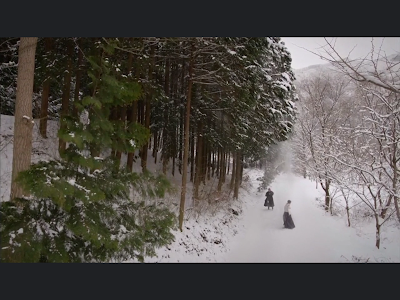 Sambong explains to Poeun that in the new country the royal family will be figureheads and actual power will belong to the prime minister, who will be Poeun. Bang-Won reports that they captured Madam Cho, but not what he overheard. Meantime Gil Sun-Mi asks if Yooksan should report being tricked by Bang-Won, indicating that Yooksan isn't the top boss.

Poeun decides to remain loyal to Goryeo and tells the king they need the land reform so they can get taxes, and they have to let Lee Saek get impeached and split up General Yi and Sambong. The king is so impressed that he has Sa-Gwang guard Poeun.

Bang-Won does his hair into a topknot for the first time, moves into his own house, and starts his own private army - to be trained Master Hong. He meets Ha Ryun, who is being exiled along with Lee Saek, to say he will wait for him to return. Da-Kyung tells Boon-Yi that her villager spies will be paid by the Min family and to take orders from Bang-Won, not Sambong. Then Bang-Won lures Boon-Yi into a snowball fight and tells her play is over now.

Historical note: Bang-Won moved into a house owned by his father, not by his father-in-law. Men usually began wearing their hair in a topknot when they married. 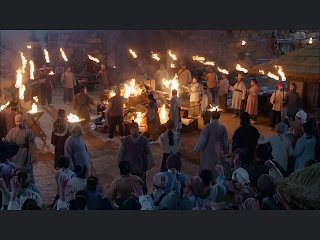 Bang-Won tells Boon-Yi that he asked Moomyung about her mother. Then he asks her to say his name one more time and to speak formally after that, and kisses her just once.

The lady with the hood takes him to a meeting where he figures out she is the leader. They tell him Moomyung started 700 years before. He asks if they know Yeon-Hyang and repeats that her children are looking for her. He can tell this is a shock.

When Gil Sun-Mi arrives later the leader, who is Yeon-Hyang herself, takes him to task. He says he lied because there was infighting in Moomyung and she united them, and claims that she deserted them first and went back to her home town.

General Yi complains about being able to order the execution of the king  but can't manage the land measurement. The nobles as well as Moomyung are interfering. Eyeliner Monk finds out that King Gongyang's messenger is the woman servant and they waylay her next time she goes out. Moo-Hyul happens along and stops them, but when he leaves they attack again and she beats them with the flat of a sword. Yooksan realizes then that she is Cheok Sa-Gwang.

The nobles mourning for General Choi are distracted by Sambong piling up all the land records in the market and setting fire to it. They burn for several days.

Historical note: General Choi was beheaded in 1388 and Kings U and Chang were forced to take poison in 1389. The land registers were burned in September 1390. 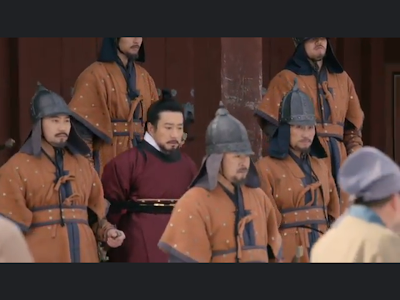 Sambong is arrested for burning the tax records, but he is happy because it will force the land reform. Yeon-Hyang shows up to talk to Boon-Yi and tell her that she has her own life and not to look for her any more.

Da-Kyung reminds Bang-Won that she is the only person really on his side and asks him why he does nothing. He tells her about the plan for the king to have no power, and that he has been pretending to hunt Moomyung, paying Biguk temple for info, and building his own forces.

Back out of jail, Sambong now attacks Buddhist temples, which have lots of slaves and own a third of the land in Goryeo because nobles donate land to them to evade the law. General Yi, being a Buddhist, objects. No sooner has Sambong talked the General around then Bang-Woo gets in a fight with someone trying to curry favor for when he becomes crown prince. He tells his father that their family has had enough traitors, and it will stop with him. He will always be loyal.

Poeun decides he has to stop Sambong, so he sends someone to Sambong's home town. They come back with proof that Sambong's great-grandmother had been a slave, and he has deceived everyone as to the class he belongs to. The guards take him away in disgrace, pretty similar to the beginning of the episode.

Historical note: Sambong was impeached for this reason in September 1391, exiled, and his sons were declared commoners. 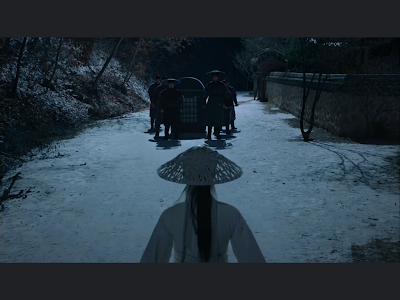 Boon-Yi tells her brother and Yoon-Hee about seeing her mother, and that she deserted them to be in Moomyung. Bang-Ji doesn't want to accept it.

Poeun talks the king into exiling Sambong and they recall Lee Saek and Ha Ryun. Sambong is sent away in a closed palanquin so his followers can't find him. When General Yi can't get Poeun to rescind the order he resigns. The king disallows it and the General leaves town to go hunting.

Yeon-Hyang decides to support Poeun and sends Gil Sun-Mi to kill the General. But someone else's arrow spooks the general's horse and he is thrown and hurt badly. Poeun has Officer Nam and Jo Joon arrested, and talks the king into executions.

Bang-Won sends Bang-ji to be with Sambong and goes to find his father. When Poeun's men arrive he sends out two palanquins as red herrings and takes his father away on a cart. The men fight Ji Ran  for one palanquin and Sa-Gwang attacks the other. She amazes Moo-Hyul by slicing hers in half with two swords. They are both empty.

Historical note: Yi Seong-Gye was badly injured by a fall from a horse in March 1392 when hunting. His followers were exiled and Bang-Won sneaked him back home in the middle of the night. 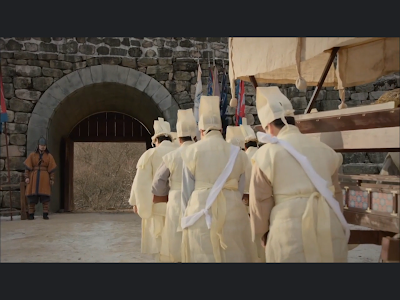 Pulling his father on the cart, Bang-Won comes across Jo Mal-Saeng, a rural scholar who helps them. They return to town dressed in white as a funeral procession with the General in the coffin.

Bang-Ji tries to talk Sambong into escaping but he refuses. He and the other exiles are sent back to Gaegyong. Moo-Hyul sees Sa-Gwang escorting Poeun and follows. She turns back to talk to him and they make a connection over not liking to kill but being loyal to friends.

Bang-Won keeps the doctor in the house and sends talkative Granny to buy medicine and pretend the General isn't badly hurt. Moomyung finds the doctor who treated the General when he first fell off the horse and discovers the seriousness of the injuries.

Poeun visits the General, who tries to talk him around around; Goryeo didn't protect the people from pirates or even the greedy nobles. Unmoved, Poeun leaves and orders the executions. Bang-Won decides the only way out is to kill Poeun. When night falls Young-Gyu brings a mace and they leaves the house with Bang-Ji and a small group of men. Poeun is escorted only by Sa-Gwang and one servant.

Historical note: Yi Seon-Gye and Jung Mong-Joo (Poeun) met in 1364 when the General was fighting the Jurchens and had been friends for 28 years. Poeun was a diplomat who could keep foreigners from invading. He was known for using his own money to pay Japanese pirates to let captives go free.
Posted by Telzey at 7:27 PM