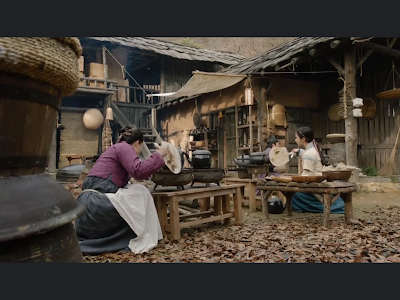 We review Kim Nae Pyung bringing the leaf-and-sword message to Minister Lee in Episode 2. He pops up again now, as Monk Ryukjong and Gil Sun-Mi send him to assassinate whoever wins the fight at the banquet. As General Yi passes through the courtyard where the dead soldiers are laid out, Pyung jumps up from among them and attacks. He is captured and everyone is stunned when he kills himself.


The injured are recuperating, there is a lot of making, delivering, and eating medicine. Bang-Won worries who sent that assassin. He takes Boon-Yi and Moo-Hyul to ID the body and decides it's the man who helped Ha Ryun steal Jo Joon's papers. Ha sees the body too and is surprised; Minister Lee had him looking for this person for 10 years.

There is a lot of negotiation as Sambong tries to get Poeun and Lee Saek to cooperate. Lee Saek wants to return the old king and to remeasure the land. Sambong counters that the king live 40 miles away until the reform goes through.

The sword-and-leaf people try the three-letter trick again and follow Boon-Yi and Bang-Won to the secret cave. Sambong realizes they are from an organization of King Gongmin's day called Moomyung (Nameless). Just then Poeun arrives, having received a letter with directions to the cave.

Historical note: Moomyung is a fictional group from an earlier drama by the same writers called Queen Seondeok and set about 650 AD. 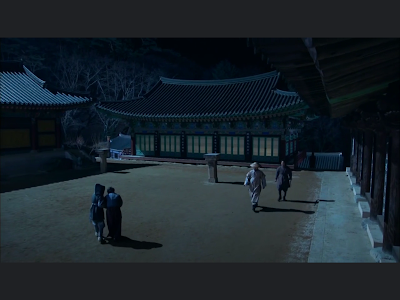 Poeun (Jung Mong-Joo) is shocked at the big map naming a new country. Sambong (Jung Do-Jeon) spends the night explaining his plan. Poeun likes the civil service exams replacing nepotism, but not the revolution part. He talk to General Yi about it and then goes to see Prince Wang Yo, thinking he would be a better king than the 8-year-old they have. The prince says he would rather live a happy private life with the woman he loves.

The land surveys get derailed because the people doing them are murdered. Sambong hatches a plan to pretend to do a secret survey, but in reality to lure in the culprit to an ambush. Gil Sun-Mi turns up and escapes during the fight, but one of his men is captured. Bang-Ji trails Gil to a temple in the forest, where he sees an old woman being led by another woman in a hood. He recognizes the younger one as his mother.

Historical note: Prince Wang Yo was descended from King Sinjong, who became king in 1197. The woman with him is fictional. 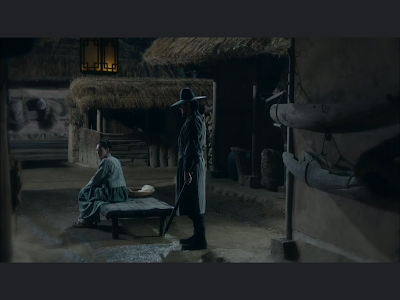 By the time Bang-Ji and Sambong follow the hooded woman she has disappeared. Bang-Ji goes home to tell Boon-Yi their mother isn't dead, but she already knew. When she was a child the man with the sword-leaf tattoo had appeared one night with a code message and their mother had replied with another code and then disappeared the next day.


Deposed King U receives a visit from a nobleman who offers a skilled assassin named Cheok to kill General Yi and put U back on the throne. A serving woman who comes in is the same old lady that we saw with Bang-ji's mother.

The land reform is debated again in parliament and no one is willing to do the surveying because of the murders. Finally Sambong promises Poeun not to revolt and Poeun throws his support for the land reform, with the other nobles following him.

On the orders of Moomyung leader Yooksan, Gil Sun-Mi gives Bang-Ji an appointment to meet his mother. Meantime Gil's man who was captured is refusing to talk, so Bang-Won decides to let him escape and follow him. Cheok follows him and stabs him however, so when he sees Boon-Yi he tells her a message and a date. Cheok overhears and is about to kill her as well, but Boon-Yi repeats the code that the Moomyung agent had said to her mother. He responds with the same reply her mother had given.

Historical note: In November 1389 a nephew of General Choi met with deposed King U and plotted to assassinate General Yi. Unfortunately for them, they asked someone else to help who turned them in and the plot was foiled. 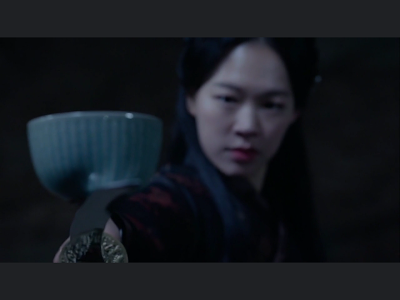 When the assassin mentions Master Gil, Boon-Yi realizes he means Gil Sun-Mi and is able to send him away. The date she heard matches up with the day the deposed King U is sending a gift for General Yi as well as the day Bang-Ji is to see his mother. They decode the message to mean that General Yi will be killed.


When King U's soldiers come with the gift they attack but are stopped by Yi's men. They kill themselves, which Yooksan had ordered them to do. Cheok breaks out of a cart, fights Bang-Ji and Moo-Hyul and gets away. They track him to the edge of a cliff, which Bang-Ji thinks he might know how to descend safely.

Bang-Ji practices catching a bowl of water on his sword, though Master Hong says he does it wrong. He once worked for the Cheok family and knows their technique. Bang-Gwa finds Cheok's body but Master Hong says it is not the famous Cheok Sa-Gwang who is a girl. This one is her brother.

Poeun again tries to talk Prince Wang Yo into being king. Young-Gyu identifies the prince's servant as the guard who had the leaf-stamp letter back in Episode 1, so Bang-Won sends assassins after him. That night the prince tries to run away but is hit by a poison dart. Yooksan offers him the antidote if he will become king and leaves him to decide. The assassins attack the servant and nearly spill the antidote, but the prince's fiancee turns out to be Cheok Sa-Gwang. She kills the assassins and catches the cup of antidote on her sword.

Historical note: There was a warrior in the 12th century named Cheok who was famous for his exploits. The Cheoks in this story are fictional but supposed to be his descendents. 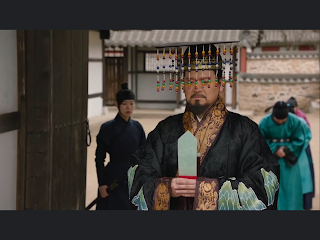 Cheok Sa-Gwang promises to protect the prince and he drinks the antidote. She then realizes their servant had betrayed them and kills him too. She explains that she learned to fight from her grandfather but never liked it and renounced the sword. Yooksan returns to see the prince and finds three dead bodies instead.

The 8-year-old is dethroned and Prince Wang Yo is crowned King Gongyang. Cheok Sa-Gwang becomes his bodyguard.

Bang-Won and Ha Ryun talk strategy and decide that either the Biguk temple or the gisaeng house (or both) is Moomyung. Bang-Won knows that they will want to find out about the assassins, so he puts a note mentioning "Maengdo Chilyak" in the ledger kept by the assassin's boss. Whoever knows that phrase will be Moomyung.

Both Madam Cho and Eyeliner Monk send for the ledger and give it to Yooksan. Looking for spies, Cho sends Yoon-Hye to check on Sambong, but follows to overhear their conversation about meeting Poeun. When Yoon-Hye lies that she doesn't know where they will meet, Cho has the kunoichi hold her and goes to spy on the meeting. But she mentions Maengdo Chilyak, so Yoon-Hye is able to get the kunoichi to side with her against Moomyung. Bang-Won arrests Cho quietly at the meeting and listens in himself. He is shocked to hear their plan that the king will be powerless.

Historical note: King Gongyang was crowned in 1389, the last of the kings of Goryeo. The rumor that King U may not have been a son of King Gongmin was really used as an excuse to overthow him and his son. Maengdo Chilyak is something made up for the drama. It means fierce-drawing-laquer-throw.
Posted by Telzey at 6:55 PM