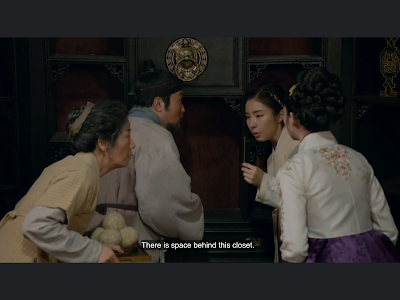 General Yi, having decideed to refuse the kings' order to cross the Yalu, gets General Jo to go along with him. Jo will agree to return home only if they depose the king, or they will be killed as traitors.

One of Lady Kang's (wife of General Yi)  sons has asthma. Boon-Yi and Da-Kyung send for his medicine, to give Bang-Won a hint of where they are. He thinks of the same thing, and watches doctors to see who orders the walnut medicine.

Ji Ran sends Young-Gyu to warn Bang-Won to evacuate the family, and Moo-Hyul to retrieve the two older brothers. Moo-Hyul arrives just as the brothers are fighting the guards and helps them escape. Bang-Won follows the medicine lead to finds his family gone; they were moved to Minister Lee's empty mansion. Sambong remembers a secret passage about the time Boon-Yi finds it by watching smoke in a draft from the hidden door. Bang-Ji fights off the soldiers as they escape, and Young-Gyu gets them to the General outside the city.

Historical note: May 22: the retreat began; May 24: Bang-Woo and Bang-Gwa escaped the king's camp; May 29: the king arrived at Gaegyung and ordered the Yi family captured, but Bang-Won had already taken them to Hamju and joined his father. Walnuts are used for asthma in Chinese traditional medicine. 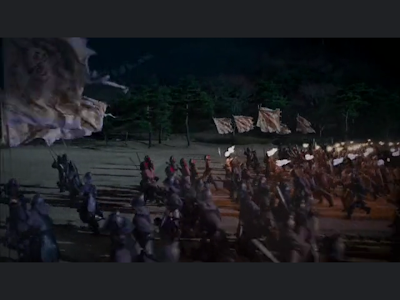 Generals Yi and Jo surround Gaegyong while Bang-Won visits nobles to convince them to keep out of the battle. Boon-yi sends up lanterns to signal the army that the gate is clear. Yi's horns blowing, the rush to the city wall, the horsemen breaking in, to the fighting on the balconies, all are reminiscent of the attack on Helm's Deep. General Choi meets Yi and surrenders.

Cue townspeople cheering the soldiers. Choi in jail tells Poeun he worries about revolution but Poeun says it won't happen. Yi and Jo divvy out government positions and agree on Prince Jungchang as the next king. Poeun calls in senior scholar Lee Saek for advice and offers assistance to General Yi.

Everyone is shocked by a folksong circulating in town that hints at Yi becoming king. Bang-Won tracks it to a peddler who claims an elderly man asked him to teach it. Thinking it was Minister Lee, Officer Nam is sent to arrest him only to find he had already died 15 days before.

General Jo, Lee Saek, and the Dowager Queen all receive letters from Minister Lee to meet in secret, only to find a message that "Chang reaches Yi." They propose to the government that King U's 8-year-old son Chang be the new king. We see the peddler, now dressed as a nobleman, remembering teaching the song and leaving the letters. He is Ha Ryun, who had been exiled for opposing the attack on Ming.

Historical note: June 1: Generals Yi and Jo reach Gaegyong, June 3: the battle and deposing of King U. The scenes of Bang-won persuading the nobles was fiction. The folksong had been used as an excuse for revolts in the 12th century. 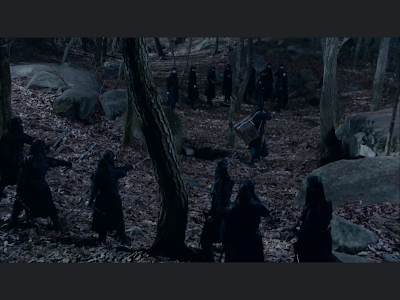 General Yi confronts General Jo over tricking him about the new king, and Poeun and Sambong question Lee Saek about the same thing. General Jo and pals go to see Minister Lee but meet Ha Ryun instead, who tries to do a deal with them.  Bang-Won looks for whoever masqueraded as the peddler. Sambong figures it out, finds Ha Ryun, and the two trade barbs. Da-Kyung pays Monk Eyeliner to find out about Ha Ryun for her.

All this time Jo Joon has been going around the country measuring land and counting citizens. Sambong goes to a lot of trouble to recruit him as an ally for land reform and get him to work with General Yi. Ha Ryun hears about it too (he found out while looking into the leaf-and-sword seal for Minister Lee), interests Jo in the whole thing, and hires Madam Cho's ninjas to help.

Boon-yi explains the land reform to her brother and admits that she wants to go back to their hometown and farm their own land. He tells Yoon-Hee and asks if she would like to go too; she says no. When he leaves, disappointed, she whispers, "But thank you."

When Bang-Won goes for Jo Joon's research it's already been stolen by Ha's thugs. Tracking them down, Bang-Won makes off with the box of research papers while Bang-Ji and Moo-Hyul fight the thugs and a patrol of soldiers. They do pretty well against greater numbers until Gil Son-Mi (Gil Tae-Mi's twin) joins in. The Kunoichi ninjas catch Bang-Won; the leader says she's not authorized to kill him and takes him to Ha Ryun.

Historical note: Ha Ryun was a real person; he had married Minister Lee's niece, was an ally of Poeun and an adversary of Sambong. 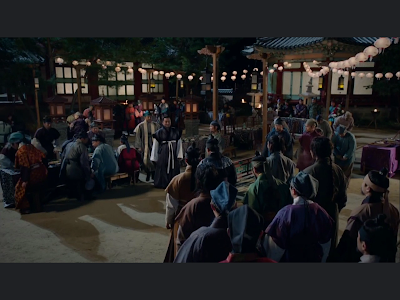 Ha Ryun calls in a kunoichi to open the wooden box and she turns out to be Boon-Yi. She and Bang-Won tie him up and escape - he to lead the kunoichi away, she to take Jo Joon's papers. Gil Sun-Mi's fight ends when he finds out that Bang-Ji is the kid he left with Master Jung, and is Yeon Hyang's son.

In parliament Sambong sets the nobles against each other by only targeting people who own more than 2,000 acres for land reform. But he puts off telling Poeun about his full plans.

Yoon-Hee discovers General Jo's plan to pull a coup. She recognizes his servant Dae Geun as the man who raped her and faints from the shock. Moo-Hyul sees her, takes her to Bang-ji, and overhears the story when she comes to.

General Yi goes to talk down General Jo and is invited to a reconciliation banquet that night. The first sign of trouble is being asked to leave weapons outside. The second is Bang-Ji recognizing Dae Geun. What they don't know is that the room behind the banquet hall is full of assassins.

Historical note: Most of the land in Goryeo was owned by nobles and farmed by tenants, with several people levying tax on the same farm. Under reform the land could only be taxed once. Sambang wants to distribute land to people who will farm it; no big landowners. Jo Joon wants the king to distribute the land to the nobles but it can't be inherited. 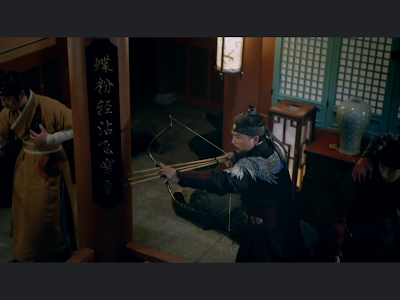 General Yi, Bang-Woo, and Yi Ran enter the banquet hall while their guards eat in the courtyard. Bang-Ji is increasingly disturbed by Dae Geun. We see the villagers hoping for their own land, Poeun arguing with Lee Saek about supporting reform, Poeun and Ha Ryun about trusting people, and Sambong and Jo Joon about postponing the reform.

Ha Ryun takes Sambong out for drinks, bragging about advising General Jo. When he says he didn't request the party, Sambong realizes it's a trap and hurries to warn Bang-Won. He takes off alone while Da-Kyung runs to get Bang-Gwa.

Moo-Hyul sees Dae Geun and remembers Yoon-Hee fainting when she saw him. He links it to Bang-Ji's unrest and tries to get him to leave, but when Dae Geun starts on the rape story, it's Moo-Hyul who overturns the table. Bang-Ji burns an attacker to get his sword, which was tied on. Moo-Hyul catches another one he throws to him.

Bang-Woo is holding an axe to Jo's neck to keep the assassins off his father when Bang-Won bursts in through the secret passage shooting arrows. The General takes the bow and shoots with three arrows at a time. Moo-Hyul arrives wielding two swords. Just as they are are leaving, archers on the roof nearly attack but are foiled by Bang-Gwa's soldiers coming up behind them.

Bang-Ji sees Dae Geun sneaking away and follows with difficulty because of a stomach wound. Yoon-Hee comes around the corner and freezes when she sees her attacker but then grabs him and stabs him in the neck with a hairpin. He strangles her but Bang-Ji manages to stab him. "You ok?" he asks with his arm around her, "It's over."

Historical note: the whole banquet sequence is fiction. Yi Seong-Gye is recorded as having been able to shoot accurately using three arrows at once.