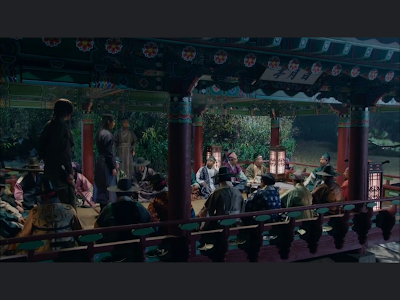 Minister Hong puts off his own impeachement by using a forged letter to accuse Jo Ban of planning to attack the palace. Bang-Won figures that it has been Hong's plan to attack the Haedonggap clans all along, but Sambong thinks he's after the General. Sure enough, Hong threatens Min Je to have his clan members sign a paper accusing Yi Seung-Gye instead.

Bang-Won finds out from his wife what Hong had said to her father. His father goes for help to General Choi while he confronts the Min clan. He and his brothers playing with a little gunpowder has given him an idea. He fills a small box with gunpowder and another with rocks and has Boon-Yi bring him one - he doesn't know which.

When the Min clan convene to discuss Hong's paper, Bang-Won shows up with his guards and the box. He lights the fuse and tells them to sign a different paper, this one charging Prime Minister Lee, Hong, and Gil with stealing land, taking bribes, and falsely accusing Jo Ban. They sign reluctantly and the box turns out to be filled with rocks. He knows they will never admit they were frightened into it.

Historical note: Hong In-Bang stealing land and accusing Jo Ban really happened, but Bang-Won did not really have the Min clan sign anything. 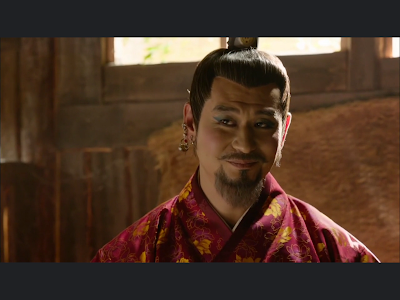 General Choi gets an order from the king to arrest the Evil Three and heads to the tribunal to get soldiers. Minister Hong gets there first however, and takes the soldiers to arrest General Yi. When they get to Yi's house everyone is gone, so he goes to the palace next. There he has a standoff with General Choi, but in the end the soldiers side with General Choi and arrest him.

Prime Minister Lee gets the news and calls for his generals to meet him in his secret room behind the bookcase. He tells General Jo Min-Soo to support Choi and Jo says he has already bought off one of Hong's servants.

Meantime General Yi has surrounded Gil Tae-Mi's house. There is a fight but Gil goes missing. He resurfaces to rescue Hong from about ten soldiers who run off. Hong decides to escape and Gil to stay. Boon-Yi's villagers are bringing in reports and they discover Hong's plan to escape in a small smuggler's boat. There he is met by his servant Dae Geun and arrested by General Jo and Officer Nam.

The tribunal soldiers find Gil in the giseang house. He is exhausted from killing about thirty of them, saying, "This is why you should never skip breakfast!" haha. Next we see him eating at a marketplace surrounded by about fifteen dead bodies. Soldiers collect around him, waiting for greater numbers, when Yi Bang-Ji arrives and challenges him.

Historical note: Jo Min-Soo was a general who supported General Yi at the Yalu River and General Choi in enthroning King U's son. 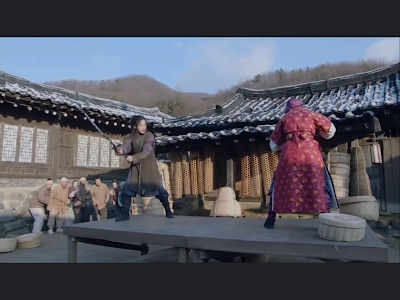 We pick up with Yi Bang-Ji's challenge and the epic sword fight with sweeping leaps on wires and twirls and kicks in the air. Bang-Ji knocks Gil's sword out of his hand but he pulls a couple of  longknives out of his robe. In the end Bang-Ji wins and the townspeople laugh and cheer.

Prime Minister Lee gets house arrest and Minister Hong and a few others get executed. In the crowd Boon-Yi recognizes Hong's servant Dae Geun as the man who raped Yoon-Hee and follows him to General Jo's house. Bang-Won goes home and chops down the tree he planted for Minister Hong.

Moo-Hyul tells Bang-Won that he wants to protect him for making the people smile. Ah what a puppy...enjoy it, it won't last forever.

Sambong asks General Yi to accept Lee's followers so he can oppose General Choi, who has a lot of land and will not like their reform ideas. Meantime Lee is telling General Choi that Yi will attack him in the end.

Eyeliner Monk Jukryeong, in jail for helping Hong, gets a visit from an old lady claiming to be his mother who brings him orders with the red leaf-and-sword stamp. Then he asks to see General Choi and sells him his logbook telling about things like the conspiracy to pass the border plan. Choi is furious and demands General Yi choose Sambong or him. Yi stands with Sambong.

Historical note: Gil Tae-Mi was a military officer before he was a government minister, but he was not a noted swordfighter. Choi and Yi had fought pirates together but Sambong and Yi were pretty tight friends. 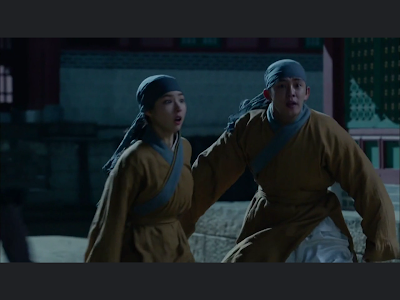 General Choi has a meeting at the gisaeng house with a Yuan merchant who has a very skilled bodyguard, and everyone else is refused entry.

Prime Minister Lee is exiled to his hometown and taken away in a jail cart. A man who looks like the one who brought him the note about King Gongmin's death drops him another one with the same leaf-and-sword stamp.

We get to meet King U, who is a complete jerk, terrorizing some palace ladies trying to play music. General Choi tries to moderate him, and then asks for help in a plan to increase power. The Ming have demanded the return of the land that Gongmin had gotten back from them. General Choi and the king go on a hunting trip with a ton of soldiers.

Sambong tricks Madam Cho into telling them that Eyeliner Monk was the person who set up the meeting with Choi and the Yuan merchant and that something is happening on the seventh day. Meantime, Bang-Won traces a cart of gold from Hong's house to Biguk temple, where they are caught and Boon-Yi has an expression. Monk Jukryong tells them the gold was traded for water buffalo horns, which are used in making bows, and the king is going to the Yalu River. They realize the king is going to attack Ming.

Historical note: Soldiers were really gathered on the excuse of going on a hunt. King U is supposed to have tried to be a good king at first, but gave up and fell into delinquincy when he couldn't counter the nobles who ran the government. 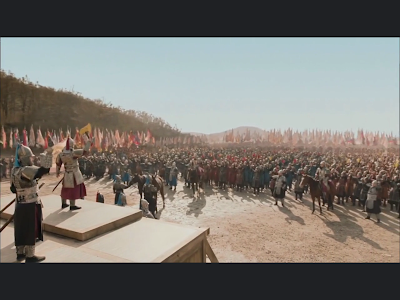 General Yi argues against the king's ruinous plan to attack Liaodong, the closest part of Ming. The king and General Choi are unswayed; in fact, Choi has already killed the Ming envoys. He orders 50,000 men conscripted for the campaign.

Yi asks Sambong for advice and is told: revolution. They will arrest Choi and get the king to sign a retraction. Bang-Ji's men are posted near Choi's house, Bang-Won's and Officer Nam's near his allies, Young-Gyu will open the palace gate to Yi Ji-Ran's men, and the villagers watch to report any movement to Boon-Yi. The whole thing will depend on General Yi's decision; if he says Go, a black horse will run. If it is No Go, it will be a white horse. They are disappointed when Shin-Jeok rides the white horse.

We get an amazing scene of the  army cheering General Choi as Generals Yi and Jo look on. Choi ends up staying with the king however, and the other two head north. Choi orders the Yi family held as hostages and Bang-Woo and Bang-Gwa to stay with the king.

The army gets bogged down at the Yalu river because of the rains and flooding. Many soldiers die trying to construct a bridge, some getting sick and others running away. A group of deserters is brought to General Yi for execution, but one of the officers refuses to do it. He had been one of the fake Japanese pirates captured back in Episode 8 who had joined Yi's army for a chance to protect his people from invaders. He would rather get killed himself than rob 100,000 parents of their sons. The General decides to protect the citizens from the king.

Historical note: The Liaodong expedition was in the summer of 1388 during the monsoon season, but it was filmed in the winter. General Choi didn't go because King Gongmin had been killed when Choi was away, and King U was afraid of the same thing. The white/black horse plot was fiction.