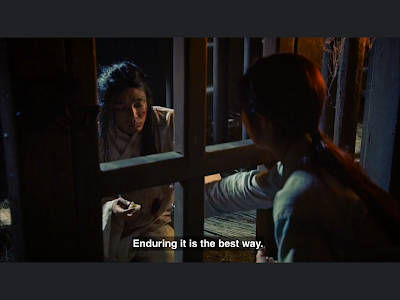 Prime Minister Lee gets back at Ministers Hong and Gil with some nicely placed forgeries and ends up arresting Bang-Won for secretly meeting with Hong. They torture him and he holds up mainly because he doesn't want to be like Minister Hong, who caved immediately.


Bang-Gwa is sent to the capital with their father's refutation of the border plan, but Bang-Woo doesn't use it. He decides that arresting one of them is an act of war against their family.

Boon-Yi asks Minister Hong for help and he lets her visit Bang-Won after the first day of torture. She takes food. Minister Lee plants another forgery on Bang-Won but Sambong sends Yoon-Hee to replace it with the one Ddang-Sae wrote about killing Baek-Yoon. Now all the ministers worry that General Yi will be down on them with his army.

Speaking of whom, he is busy at the moment turning back an invasion, but the next thing on his agenda is getting his kid back.

Historical note: In August 1383 the Jurchen chief Hibaldo, allied with Ming, invaded Goryeo and was winning until General Yi arrived. Hibaldo escaped but most of his men were killed. 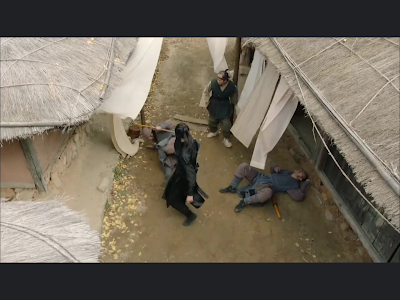 While the ministers plot against each other, Officer Nam Eun is assigned to conduct the investigation (read: torture) of Bang-Won. Everyone thinks Nam will be fair because he hates the Prime Minister, but they are secretly accomplices.


Madam Cho sends her head ninja kunoichi to kill Yak San, the man who planted the letter in Bang-Won's room. She fights Eyeliner Monk's men and then Bang-Woo. He arrests Yak San and sends him to be interrogated by Officer Nam as well. Nam hears the confession and reports to PM Lee.

Moo-Hyul brings his family to live in town, including ex-swordmaster Hong who is now the family servant, paying back all he swindled from them.

PM Lee's people pretend to let Yak San escape and then shoot him. But surprise: he has armor and Moo-Hyul helps him get away. Meantime Officer Nam tells Bang-Won his father died, which makes him nearly hopeless. Until Nam says it was a siege. Bang-Won isn't fooled because his father never holds out in a fort but always attacks.

Yi Seong-gye shows up to first, order PM Lee to let his kid go; second, to appear at the not-so-secret cave and tell Sambong that he's ready to work together; and third, spring Yak-San on the parliament to prove his kid is innocent.

Bang-Won is taken from prison with a bag over his head and released to find Officer Nam and Sambong  together. Surprise again: the man who tortured him is on their side and they have to work together. 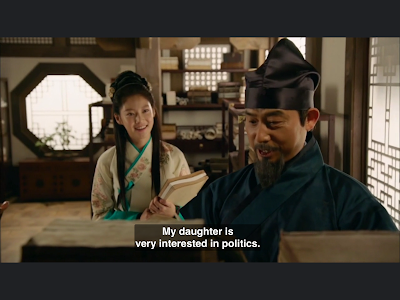 Searching for the mystery fighter who rescued Boon-Yi from Eyeliner Monk, Gil Tae-Mi visits the acting troupe. Gab-Boon recognizes him though, so another actor meets him as Ddang-Sae watches.

Boon-Yi takes Bang-Won to a doctor. When he hugs her she says she hasn't got feeings for him. In reality she knows their class status is too far apart.

General Yi breaks ties with Minister Hong, feeling that he no longer owes him for helping pass the border plan. Prime Minister Lee is deposed, which Sambong thinks was a big mistake for Hong. Hong then asks the wealthy Haedonggap clan to be allies.

At this point we meet Min Je (pen name Eoeun), the head of that clan, and his daughter Da-Kyung. She tells her father Hong blew it because PM Lee protected him from General Choi. Ooh...she's as smart as Sambong!

Ddang-Sae and Gab-Boon try to leave the city but Eyeliner Monk's men find them and use a paralyzing dart. Ddang-Sae hides in the gibang, where he overhears Madam Cho instructing her kunoichi. He recognizes Yoon-Hee there and when the drug wears off, trails her to a meeting with Sambong. He confronts her with being a double spy and she confronts him with being Venomous Magpie.

Historical note: It was considered disrespectful to call a high noble by his real name so pen names were often used. Da-Kyung is Lady Min, who will become queen of Joseon. No one kept records of women's names in those days, so the writers made one up. 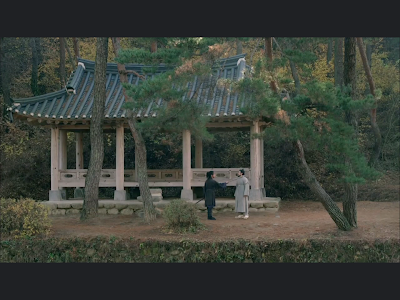 Sambong decides he needs the support of Haedonggap clan and sends Poeun to talk them over. But while he is there, Madam Cho arrives with a marriage offer from Minister Hong.

Ddang-Sae and Gap-Boon argue because it's dangerous to stay in town and he's decided to stay and help Yoon-Hee.

Bang-Won visits the Min family to offer an alliance. When Da-Kyung refuses, he asks if they are afraid of Hong, and suggests a way to get out of the marriage. The next time Minister Hong comes, Min Je is busy yelling at his daughter for seeing a man secretly, and the marriage is called off.

Yoon-Hee reports to Madam Cho that she's joined Sambong's spy group. Officer Nam catches her and takes her to Sambong, where Ddang-Sae overhears them talking. He urges Yoon-Hee to go away from it all and is stunned to hear his sister is a spy too. He leaves a letter for her, but Bang-Won intercepts and is amazed that Venomous Magpie is Boon-Yi's brother.

Yoon-Hee sees a famous assassin in town and is afraid he's after Sambong, at a secret meeting with General Yi. She sends out an alarm. Ddang-Sae shows up and tells Sambong to leave his sister alone, but as he is leaving he feels the aura of the assassin. Bang-Won and Moo-Hyul race to the scene as the General calls out his men.

Historical note: Haedong is an old name for Korea. Gap means noble. They are the oldest noble clans, who have been around for about 700 years, ever since the Silla kingdom. 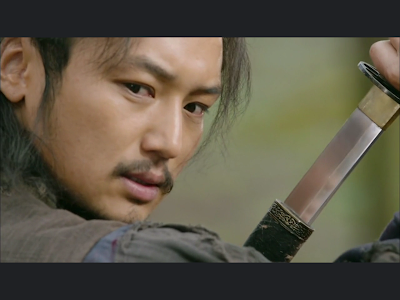 The assassin kills the guards but Yoon-Hee arrives to throw chalk in his face and pull Sambong away. When the assassin finds them she fights back with a sword and then Ddang-Sae engages him. A second assassin attacks, Yoon-Hee breaks a stale-mate with a hair-pin, and Moo-Hyul joins the fray. He plants himself in the earth and slices a third attacker out of the air. They kill two assassins and the General arrives in time to shoot the other in the foot. It's great to have a fight in the daytime so you can see what's going on.


We get a tearful brother-sister-childhood friend reunion. The General accepts Ddong-Sae as his son, gives him the name Yi Bang-Ji, and assigns him as Sambong's bodyguard.

Bang-Won and Da-Kyung marry. She tells him she won't sleep with him until his family proves successful. General Choi warns that it will be hard to get that clan to help with politics, which proves true.

Yi Bang-Ji practices his moves, remembering his teacher saying that if you are fast enough blood doesn't stay on the sword, and that he will improve to match anyone he fights against. Well, he fought Gil Tae-Mi. He sends Moo-Hyul to get Gab-Boon and all his stuff. Gil Tae-Mi sees Moo-Hyul strutting around in the Venemous Magpie outfit and takes him on in a little fight. He knows immediately he's not the real Magpie and wonders if this is a new fashion trend? Haha.

Minister Hong confiscates some of the Min family land and breaks ancestral tablets. But it's a trap. When the owner, Jo Ban, retaliates, he is captured and falsely accused of treason.

Historical note: The General gives Ddang-Sae the family name (Yi), the generation name for brothers and cousins (Bang), and a given name with the same meaning (land). Jo Ban is a real person who became a diplomat and a translator for Bang-Won.