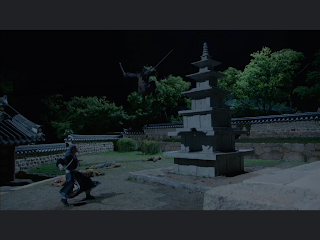 Bang-Won tries to get Boon-Yi to escape before the guards catch her for setting fire to the granary. But Sambong told her if she ever needed to find him, to go to a man who sells wooden plates in the market. (in Episode 2 he tied up Ddang-Sae in the cabin.)  Bang-Won recognizes her little wooden figurine and follows her to find out who owns that secret cave.

Moo-Hyul confronts Master Hong with lying in order to continue being paid for teaching. He admits it and Grandma tells Moo-Hyul to go out and get a reputation so he can earn money. He goes to the market and sees Boon-Yi. Who he has a crush on.

Everyone converges on the poor guy who is attacked but gets away. Boon-Yi walks into his shop and is bagged up and delivered to Biguk Temple. Seen by Bang-Wan and Ddang-Sae.  Eyeliner Monk asks her about a coded message on a leather strip. Minister Hong comes to question her but gets sidetracked reminding Bang-Won about tormenting him when he was a student. There is a pretty good fight when Ddang-Sae arrives, highlighted by his jump from a pagoda shrine 15 feet in the air to attack Eyeliner. While all this is going on Moo-Hyul makes off with Boon-Yi as slick as you please.

Bang-Won goes back to the market where the wooden plate guy sees that he has a wooden figurine and gives him another coded message strip before expiring. We watch as Bang-Won and Boon-Yi separately pull a core out of the figurine and wrap the leather strip around it. The letters line up down the stick and tell them to go to Hamju and follow Yi Seong-Gye.

Historical note: Matching rods made to use with coded messages strips were called scytale (rhymes with Italy) and used in ancient Greece. 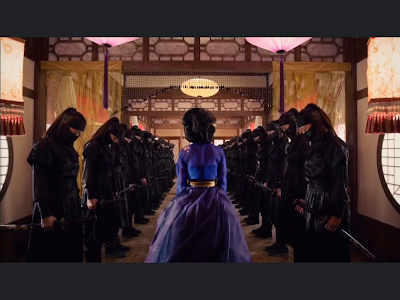 Boon-Yi brings Moo-Hul to Hamju, tells the all too common tale of losing her home to rich officials, and gets admitted to the camp. Bang-Won comes a little later and finds that a letter advocating protecting the border and gathering people is circulating there. He runs across his old school friend Hao Kang, now called Lee Shin-Jeok, and knows he's behind the letter.

Shin-Jeok kidnaps Boon-Yi (how many times is this?) pulls out her wooden figurine and accuses her as a spy. She just asks to see Sambong pronto and shows that Shin-Jeok has a figurine hanging around his neck too. This is all watched by Bang-Won and spies of Minister Hong who followed her here.

Madam Cho of the gisaeng house pools information with Monk Eyeliner to realize there is a new secret organization somewhere and sends out her lady ninjas. Minister Hong and Gil Tae-Mi plot against Prime Minister Lee.  Lee listens to a fortuneteller who tells him his path is in the northeast (where Hamju is).

Shin-Jeok agrees to bring the secret leader if Bang-Won brings his father. They both come alone however, and get kidnapped by Minister Hong's spies. Moo-Hyul rescues Bang-Won again and piggybacks him (he's wounded) home in time to see Sambong show up and stop the General from executing Boon-Yi.

Historical note: Women ninjas called kunoichi existed in Japan in the 16th and 17th centuries. They were primarily used in espionage, including posing as maids and geishas. 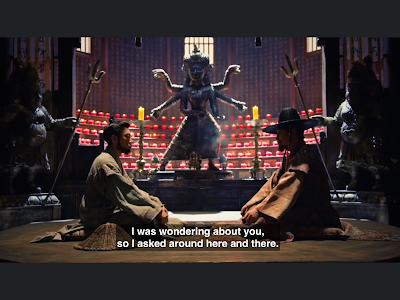 Sambong tells General Yi that he has been sending people to him to secure the border and to show  how cruelly the government treats the commoners. Shin-Jeok (Hao Kang) and several others corroborate this. In a flashback we see that the General captured fake Japanese pirates, and when they told him that the government  had taken everything from them, he added them to his own army.

Sambong says he can tell the General's prime concern is to protect the people, and that can't happen as long as the three corrupt ministers are running things. They need a new government and General Yi needs to be the new king.

Bang-Won has overheard the whole thing and tries to encourage his father. When that goes nowhere he finds the paper about stabilizing the border, stamps it with his father's seal, and sends Shin-Jeok to Gaegyeong with it. Boon-Yi had caught Bang-Won with the stamp and he ties her up until she promises to not give him away.

General Choi Young orders Prime Minister Lee to lower the taxes, but he can't get the Evil Three to do it until he suggests bringing General Yi into the government. Since that worked so well, the prime minister rewards his fortuneteller. Minister Hong has Eyeliner Monk question this fortuneteller, and she tells them she is an actress hired by Sambong. She has a badly scarred face, but when she leaves she pulls off her latex appliance and we see she is Yoon-Hee. Sambong meets with Minister Hong and gets him to conspire against the prime minister.

Historical note: Pirates from outlying Japanese islands like Tsushima attacked Korea many times beginning about 1350, 175 raids being recorded from 1376 to 1385. 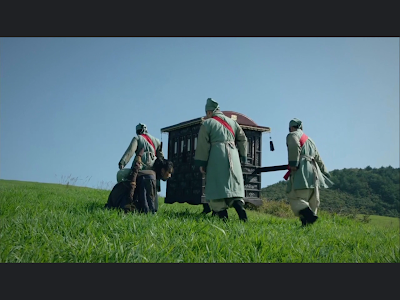 After Yoon-Hee reports to Sambong she reports to her other boss, Madam Cho. She has a fake name here and doesn't tell Madam Cho everything.

Flashback to that meeting between Sambong and Minister Hong. He told Hong to side with Gil Tae-Mi and General Yi and drop Prime Minister Lee and General Choi.  General Yi would go along if the border stabilization plan passes parliament.

Sambong visits Boon-yi's people and has them complain to General Choi that their land had been taken away and registered to Hong's servant instead of the government. A furious General Choi arrests the servants. Hong realizes he's in trouble.

Now Sambong sends Yoon-Hee to pose as a noblewoman and hire Ddang-Sae's acting troupe to put on a a play about Gil Tae-Mi killing Baek Yoon. This happened back in Episode 4 but it was Ddang-Sae who'd done it. He recognizes her but she tells him to pretend he doesn't.

Minister Hong sends Eyeliner Monk to Hamju to ask what reward he will get if the border stabilization plan passes. When the General realizes what happened with the seal he arrests the monk and sends son #2 to Gaegyeong with a note that he did not send in the border proposal. Bang-Won chases down Bang-gwa and ties him to a tree.

The play starts such rumors that General Choi decides to push Hong and Gil out of power, but Prime Minister Lee wants to save his longtime friend Gil. He tells Gil to join them against Hong, but Gil decides they will give up half their assets instead and lie low for a while.

Meantime Ddang-Sae has seen his desolate home town and come for revenge against Hong. Gil Tae-Mi duels him and it's not till Madam Cho's ninja girls pitch in that Ddang-Sae runs off. But Hong and Gil think Prime Minister Lee had sent the assassin, and they vote against Lee and for the border plan. 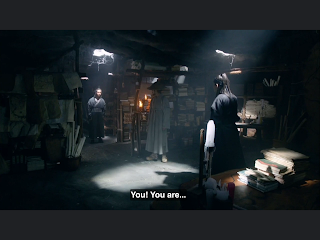 Now that the border plan has passed, Bang-Won hopes that reform will come soon. Prime Minister Lee goes to Madam Cho to figure out why it passed. He yells at Gil Tae-Mi for voting for it, and Gil just growls back that he shouldn't have sent an assassin.

The General is determined to revoke the border plan even though Ji-Ran, his second in command, wants to let it stand. He knows it means he is indebted to Hong now. Boon-Yi's villagers and Moo-Hyul's family are admitted to the camp.

Yoon-Hee finds another letter from Ddang-Sae in the not-so-secret cave. Sambong is very worried about who this unknown assassin is and who is behind him. Then we get the scene from the first of the drama where Bang-Won waits in the cave for Sambong to show up and Ddang-Sae turns out to be there as well. Dang-Sae states his opposition to a plan that will get a lot of commoners killed, and stalks out. Yoon-Hee follows him and realizes that he is the assassin.

Sambong berates Bong-Won for forging the stamp because it destroyed the trust he wanted to build with the General. He relates how destructive it was once when a traitor forged an order from the king. He kicks Bang-Won out, but Bang-Won vows to do better and to return.