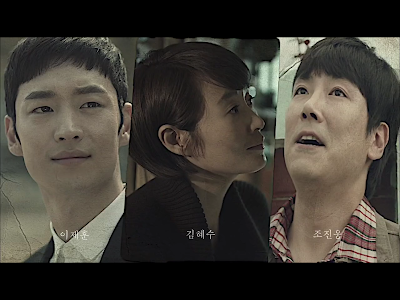 Here we come around to the Ides of March again. What a great day to have begun watching Korean dramas three years ago! We watched 23 dramas this year, and dropped just as many. I find that I don't have as much patience with drama tropes, fluff, and silliness. I need a good solid plot with good writing to enjoy a show. If course we need good actors, and good actors is more important than cute actors, which is a different standard than a lot of watchers have. As before, they are rated out of five stars.

1. Punch – Started the year with one with a great plot! A crooked prosecutor decides to fly right in order to protect his daughter and ex-wife after he gets a fatal cancer diagnosis. To do this he has to outsmart the machinations of his erstwhile buddy, the chief prosecutor. This is well-done and interesting, but with a bittersweet ending. ****

2. Two Outs in the Ninth Inning, also called 9 End 2 Outs. A man and a woman who have been platonic friends since childhood share his apartment after he sublets it to her when his company transfers him abroad, and then cancels the transfer. He becomes jealous of her boyfriend, and then they start falling for each other. ***

3. Let's Eat - A show about eating, with close-ups and discussions about food. Oh, and there's a plot about a legal secretary, the people in her office, and the insurance salesman who lives next door. **

4. What's Up! The students at a fine arts college learn to work together as they cope with personal problems and secrets, and with a famous professor who is always drunk. One side story is about a voice student who is afraid to sing in front of anyone, and then belts out an amazing finale to their musical production. **

5. Falling For Innocence, also called Falling in Love With Soon-jung – A cut-throat businessman is fighting his uncle for his father's company when he gets a heart transplant from a kind-hearted man who was engaged to a woman in the company. He starts to fall for her and becomes more like the man who died. ***

6. Warm and Cozy, also called Jeju Island Gatsby - A slow-moving show about a man who sells his restaurant to a woman he thinks is dying, but isn't really. They slowly become fond of each other over the interference of his annoying old girlfriend who really just wants his money. Yeah. We would have dropped it except for the cute storyline about his uncle and the lady pearl-fisher. **

7. My Girl – Cute show about a girl who works as a tour guide to pay off her father's debts and meets a rich guy who admires her ad-libbing skills. He pays her to impersonate a long-lost cousin to make his dying grandfather happy. The grandfather recovers and they start falling in love but are stuck with the impersonation. ***

8. I Remember You also called Hello Monster – An expat detective returns to Korea to find his kidnapped younger brother and solve his father's murder. There are two serial killers in this one, both of whom you come to sympathize with because of their rotten backgrounds. It's a very good story with a very lame ending. ***

9. Oh My Ghostess – Kim Seul-gi does a hilarious job as a virgin ghost who possesses bodies trying to find a man so she can move on. Park Bo-young does another hilarious job as the shy chef who gets possessed and acquires all the traits and mannerisms of the ghost. The poor head chef doesn't know who he's in love with, and neither do we. In the suspenseful second half of the story the ghost comes across another ghost who possesses people and finds out how she died. *****

10. Heard it Through the Grapevine – A serious, very well done drama about a young man who gets his girlfriend pregnant and marries her over the objections of his wealthy snobby parents. The baby is cute, the boy is struggling against his parents, and the girl is very smart and trying hard to get along with everyone. Eventually she wins over the staff, his mother, and almost everyone except his stubborn dad. ****

11. Twenty Again – A girl who had to get married lives in her husband's shadow and lets him push her around. When her son goes to college she signs up also, finds out she can do well, and meets a man who always had a crush on her. She's rather too naïve to be believable however, and there is a weak ending. ***

12. Miss Granny – this is a movie, very imaginative and funny. A grandma who feels unappreciated gets magically turned young again and gets to sing with her grandson's band. She finds out who really cares about her, and learns to interact with her family better. There is a surprise ending when someone else get turned young by the magic.****

13. King of Dramas – A young screenwriter is alternately helped and manipulated by an unscrupulous television producer, Anthony. He uses all kinds of tricks used by real dramas to gain power or audiences, so the catch-word from this show has become: What would Anthony do? ***

14. Dr. Champ – A young doctor is recruited to work at the Korean Olympic training camp. She learns from the senior doctor how to work with the athletes and trainers and to navigate power struggles. **

15. Miss Korea – To save his fledgling cosmetics company a young businessman talks his ex-girlfriend into entering the Miss Korea pageant and advertise his wares. Most of the contestants come from one of two beauty schools. The head of one is a classy, glamorous ex-Miss Korea. The other is her embarrassing slapsitck ex-assistant. ***

16. Plus Nine Boys also called Age Ending in Nine Boys – Since it is bad luck for your age to end in 9, it is a rough year for a family with a 9-year-old actor, a 19-year-old judo player, a 29-year-old travel agency agent, and their 39-year-old tv producer uncle. They all have joys and woes at work and with girls they like. ***

17. The Pirates – this is another movie. A humorous one set in historical times, about a whale swallowing the royal seal given to Korea by the Chinese emperor. Pirates, bandits, and the Korean army compete to find it first. It appears there is going to be a sequel. ***

18. Couple or Trouble – A spoiled, rich heiress fights with a repairman working on her yacht and dumps him and his tools overboard. Later she gets drunk and falls off the yacht herself, and comes out of the water with amnesia. They meet at the hospital, and since he needs a nanny for his orphaned nephews, he lies that she is his live-in girlfriend. ***

19. Splish Splash Love – two episodes. A high school girl afraid of taking her college entrance exams, steps into a puddle and falls into Joseon times. She teaches the king algebra and science, and helps him invent hangul; and realizes that she knows more than she thought she did, and gains confidence for the test. ****

20. Imaginary Cat – What could be cuter than a man and his cat? The man draws webtoons and the big orange cat makes sly remarks on the side. There is a girl who likes the cat and thinks it may have once been hers, and then starts to like the boy. Cute, but not a whole lot of plot. **

21. She Was Pretty – Slightly amusing story about a girl who was very pretty when young but has now apparently become ugly because of frizzy hair and red cheeks. She is afraid to meet a childhood friend who used to be ugly and is now very good looking, so she asks a friend to stand in for her. They both fall in love with the guy. ***

22. I Am Sam – The spoiled daughter of a mob boss gets a crush on a high school teacher and gets her father to put her in school with that teacher. They get involved with a student who has a sick little brother, and another one who looks tough but tries to keep his best friend out of trouble, as well as thugs from a rival mob. ***

23. Signal – Awesome time-travel police drama in which a detective from the past talks to a modern-day profiler over a magical walkie-talkie. The profiler is on a cold case squad with a woman who knew the detective years ago, before he went missing. Often dark, always intriguing, and full of surprises. *****
Posted by Telzey at 9:01 AM