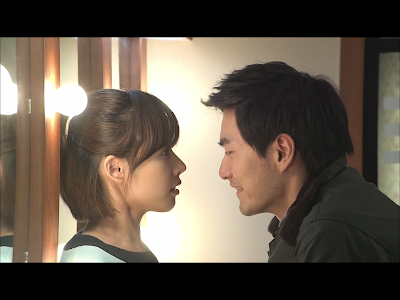 Here we are at the last episode. It is the story of the new timeline created when Sun-woo went to Reporter Oh with the videotape. Jung-woo and Choi both go to jail, and in fact we only see Choi at the very beginning, when he rams the phone booth. We don't see what happens to him after he gets out of jail. Sun-woo grows up with Reporter Oh as a mentor.

We begin with little Min-young standing in the alley by the wrecked phone booth. The man in the next house comes out to check the weather and sees it, and immediately calls out to other people and they get the police. Yoo-jin comes looking for Min-young and hustles her away. I wouldn't want my child watching a homicide scene either. Look, they both have yellow raincoats. Cute! They fly away to a new life in America.

Hyung knocks on Sun-woo's door and we see handcuffs and the police standing behind him. Sun-woo refuses to talk but he looks out the window as they leave through the gate to the weeping of the housekeeper. He is still moping when Reporter Oh calls him up and takes him out to dinner. Oh tries to console him by saying his brother's sentence will be light, and he's seen lots worse stuff happen. Sun-woo decides to be a reporter because they were able to catch criminals that the police couldn't. Oh says that he ought to be a good reporter, and someday he will hire him and give him a chance. One of the few heartwarming scenes in this whole thing.

Young Sun-woo gets a phone message from his older self. [7:00] He was going back at noon and couldn't return, so to forget about him and just live his own life. “Every decision you make will make me. If you live every day the right way, you will find me in the mirror after twenty years.” Young Sun-woo writes a message to himself in his diary and leaves it at that.

Fourteen years later in 2007 we see young Sun-woo, now grown up, as a reporter at the scene of an accident. He jumps in front of a truck to rescue the victim's severed arm, and is nearly run down himself. So he's still the reckless type. Now-Chief Oh calls him about a company party. When he walks in late he accidently hits rookie Min-young with the door and is told off to take her to the hospital. Being pretty drunk, she pulls his hair and throws up on him in the cab and says embarassing things. Later he gets after her and says he hates people who can't control themselves when drunk. She just looks at him with stars in her eyes and asks, “Do you have a girlfriend?” hahaha.

She worms her way into his taxi and flirts until he tells her to lay off, and suddenly his worried face in the dark reminds her of the ajusshi she had seen in the phone booth. Immediately she wants out. The next day she asks a co-worker if Sun-woo has a criminal record or anything. She makes such a fuss that Sun-woo asks why. (Although dragging her by the arm is a bit much.) She says she's had trauma, and she likes him but she's afraid he'll ruin her life. He thinks she's nuts. [25:35] At least her hair is good in this timeline. Now we get some vignettes showing how their relationship develops over the next few years.

2008. Min-young walks into the green room to find Sun-woo sleeping on the couch. She goes in for a closer look and (Who would do this? It's sexual harrassment.) lifts up his collar to peek at his chest. He wakes up and she tries to run off but he pins her down on the sofa, saying she had been treating him like a rapist and now she does this? When Chief Oh walks in, she calls for help and he asks for the police. Chief Oh merely says, “Look at you two having fun!”

2009. Min-young gets into the news van and sits next to Sun-woo, who complains that she can't sit by him or he'll ruin her life. He falls asleep later, though, and when his head flops down on her shoulder she smiles and takes a selfie. He wakes and snipes at her, but then turns away and smiles to himself.

2010. Min-young in her cute colored apartment is overjoyed that Sun-woo calls her up to go to a movie. She spends a lot of time getting ready only to find that the whole department is there. She sobs during the movie that enough time has gone past and he could have called her but he demurs why should he? And then gives her a fond smile.

1011. Min-young wakes Sun-woo with a phone call. (His phone has the picture of her with the parka, and she hasn't even been to Nepal yet.) She's coming in from New York and wants him to meet her at the airport. It's her vacation. He objects but hops out of bed.

December 2012. Now we're up to when the drama started. [36:32] Sun-woo meets Jung-woo at that cafe. Hung is visiting, and there's no clue whether he's a doctor or not. They mention that their mother speaks sometimes. Jung-woo remarks that Sun-woo looks more and more like that man who helped them twenty years ago. Sun-woo looks a little conscious and says he doesn't remember. What? Doesn't hyung remember the other timeline? Did Sun-woo never tell his brother about the time-traveling? They ask each other about getting married and Jung-woo just shakes his head. He seems hesitant, not confidant. Does he still think about Yoo-jin? Sad. Sun-woo says that if he ever marries, he has a girl picked out who would never let him get depressed. So I guess he gets depressed. Jung-woo says he is going to Nepal (he has his red parka) and Sun-woo says Min-young is going there too, on assignment.

When Sun-woo gets back from lunch the other news staff are just leaving for the airport. He asks for Min-young and finds her in the green room. She complains he hadn't said good-bye and they bicker, and then he locks the door and lifts her onto the counter. He almost kisses her and then pulls back. “That reminds me,” he says. “I promised never to touch you. You said I would ruin your life.” She backpedals, someone knocks on the door and he goes ahead and kisses her. She leaves but comes back to tell him that this is how he is ruining her life, because he teases her and she will never get married. She tells him that long ago she saw a man who looked like him and had said to avoid anyone who looked like him because he would ruin her life. [46:00]

They replay the scene where he says that in the phone booth, but we can't tell if Sun-woo is remembering it. But he asks questions and she tells him that this man was really hurt, he told her that, and then he died. It was when she went to America, so 1993. She leaves with a co-worker but he remains, stunned by the news. He puts things together and figures out that his other self died.

She answers her phone on the plane just as they are telling people to put away their electronics. He asks her why she didn't stay away? What will she do when he dies? He looks at his last entry in the diary, which reads, “Did you get back safely? I will trust your words. I will understand my brother some day.” He orders a ticket to Nepal and as he packs he sees himself in the mirror [51:20] and the words come, “If you live every day the right way, you will find me in the mirror after twenty years.” And there he is. The same person he had seen as a boy. The image flashes several times between the young and adult versions, and perhaps at this moment his memory merges and both versions become one. “I will trust that I will make the right decisions.”

At the airport he turns in his bag (how did he have room in that little bag for that big puffy coat?) and buys the watch he used in all his time travels. Dr. Han calls and he tells him that he's going to see Min-young because she is the key to his fate. There was more trouble than the brain tumor; his future self from 2013 died in the past in 1993. Could that be a set fate, or can he avoid it?

December 4, 2012, he boards the plane and sits on the other side from before. He records a message to himself: I can no longer live without caring about the future. (Does that mean he has been flippant because his past trauma made him want to avoid making connections and being hurt again?) He wonders if these events were true. If so, he can save his future self and keep Min-young from being unhappy. But he decides it's a fantasy and that: I will believe what I want to believe and just love the girl I love.

The epilogue during the credits shows Jung-woo from episode 1 in his red parka, with his incense stick, lying in the snow. A shadow falls on his face; it's a man in a yellow parka who reaches out a hand. That scene obviously doesn't belong in the beginning because Jung-woo died in that timeline. Does he go out on the mountain a second time looking for the Maruna Lodge? Does Sun-woo find him on the mountain right then, or does hyung die again and Sun-woo uses the one incense stick, and only that one, to rescue him twenty years later?