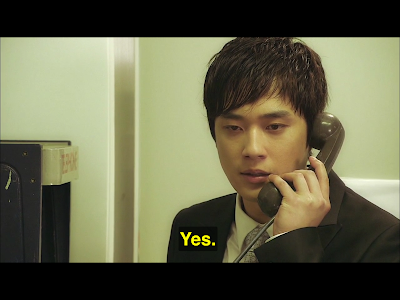 It's April 24, 2013 (the supposed wedding day) at 8:00 pm. Dr. Han sits in his office looking at Sun-woo's phone, which also reads 8:00. How did he get it? He listens to the first message, which was Sun-woo saying the incense is mocking him and he is stuck in the past. The second one is an update that he is still stuck and asking how everything turned out. We see Sun-woo's watch, which says 12:40. Then Choi's car rams him.

We move to the same time in 2013; the wedding is late and people are starting to murmer. Sun-woo's friend from work arrives with word that he is missing. Dr. Han figures since Sun-woo went to see Choi that his car should be where the hospital used to be. (So now the hospital is gone.) He finds the car, and sitting on the curb next to it is a disheveled Dr. Choi. The wealthy, well-dressed version of him surrounded by lawyers doesn't exist. He turns and without a word drives away in his delivery van.

We return to Sun-woo, who has passed out but now comes to again, still in the rain. His watch reads 2:21. He leaves a third message to say he is badly injured but can't imagine his life will end here. He tries to move his leg and the side of the phone booth but can't.

In 2013 Min-young waits in her wedding dress until her dad comes to tell her it's too late and time to go home. The police check out Sun-woo's car, a tow-truck comes to take it away, and the reporter friend gives the small box from the front seat to Dr. Han. It's the wedding rings. Dr. Han sits on the curb waiting, until it grows dark. Jung-woo, who has just flown in, calls to ask the news. Shouldn't he have returned when the incense burned out? It has been over six hours. So 6:30. Han reports that Choi had been with the car. He was very changed, but must have been up to something, otherwise why was he there? Jung-woo says he knows where Choi would be. Has he been keeping tabs on him in this timeline?

Choi is in his shop drinking soju from a plastic cup when Jung-woo walks in, looking younger and thinner, actually. Maybe it's the haircut. [15:00] Choi gripes that the brothers ruined his life, and then admits that Sun-woo is dead and he did it. He cackles that it was a perfect crime, and tells Jun-woo to look up the accident in the police records. A distraught Jung-woo asks him why he couldn't have been a better man when he had a second chance at life. He has prayed for twenty years that Choi would reform, because Choi is his father. What an awful pair they are, he killed his father, and Choi killed his father's son. Choi is stunned too, and disbelieving, until he remembers what he had done to Jung-woo's mom.

Dr. Han and Jung-woo meet up at the police station, as the cops look through records of traffic accidents in 1993.

Dr. Choi drives drunkenly off to see Jung-woo's mom. He's been keeping tabs on her, too, because he knows what clinic she's in. He cries at her that she had told him the child wasn't his, as security hauls him away. She sits still unresponsive.

The police find the hit-and-run phone booth accident. A witness had heard a loud noise about 1:00 and seen a car, but thought the noise was thunder. The victim was found about 8:00 and when the police arrived at 8:30, he was already dead. They had pictures of the accident scene and of his work ID badge, which they thought was fake. Reading the file, Jung-woo and Dr. Han are devastated.

Min-young, reflected in a mirror, tries to call Sun-woo, with no answer. Her mom says the brothers are alike.

Choi calls Jung-woo, apologetic and wanting to meet, but Jung-woo hangs up on him. As he fiddles with his phone, he swerves and goes off the road, and that's the end of him. For this timeline, anyway.

1993 Choi is pacing his office when Jung-woo calls from the hospital. Choi threatens him again and asks if he is at the airport. Jung-woo just says, “yes,” and hangs up. So, the same response both times.

So now we are up to 8:00 pm again, with Dr. Han in his office. An hour before, the police officer had said there was an odd item belonging to the victim that had been saved in an envelope. When he opened it, it turned out to be a modern cell phone. The officer thought it was a mix-up somehow, but Dr. Han knew what it was and kept it. He put a new battery in it and played the messages. [37:50] The fourth one says he will think of a way to get back. We see him pitifully trying to attract attention by banging on the metal rail. In the next view it is dark, and still raining. He can hardly move, but he leaves a fifth message. “I think I know why I can't go back. The incense stick was me. When I lit it, I became the fruit of knowledge for other's lives.” We see a montage of events from the drama, including Jung-woo talking to the crooked cop. “It was an opportunity and a curse. It was me. I used all the incense sticks; my role is over. I won't ever be able to go back. I don't feel depressed; I won't have to feel guilty for playing God. It was never in my power, but His. For being a true friend to me in every life, thank you.” He passes out again.

Min-young in the mirror is listening to her mother guessing that he must have died because no one can find him. Suddenly she gets a new memory. When a child (exactly twenty years earlier) she had come upon a man lying in a crumpled phone booth. She recognized him as the man who had taken her mother to the hospital. He told her that if someday she saw a man who looked like him, to stay away because he would ruin her life. Adult Min-young bawls as she remembers making a pinky promise. He dies; his hand falls; his watch reads 8:07.

Sun-woo said he was the fruit of knowledge, referring to the fruit from the tree of knowledge that Adam ate. In both cases it not only gave forbidden knowledge but brought death as well. If his role is over, would he have died even without being hit by the car? He at least has no role with the people of the present. But you notice that his watch said 8:07 and no one else's went past 8:00. It has been suggested that his timeline extinguished when he died, because no one is shown after that.

This episode all happens on the same day as the last one, is still the timeline where the brothers had gone to the police, Jung-woo and Choi had gone to jail, and Min-young had an American father. Sun-woo had died in 1993 and his cellphone had been in the police station for twenty years. Him being the incense stick is an oddity. I suppose that means his life was connected to it and using it used up his life.