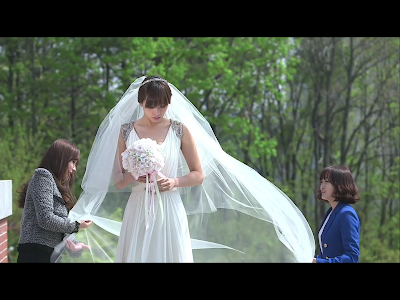 April 24, 1993, 11:00 am. It is raining as people walk into a church. According to the Dramafever subtitles the announcement board in front reads Groom: Park Sun-woo, Bride: Kim Yoo-jin. That is wrong though; it's Park Jung-woo, the older brother. Young-hoon (young Dr. Han) greets hyung and Shi-ah (young Min-young). Hyung has sent Sun-woo to look for Yoo-jin's passport. Evil Minion, pretending to be from the high school, calls the priest to find out where Sun-woo is and heads for Yoo-jin's store.

Young Sun-woo can't find the passport (Yoo-jin finds it in her bag) and heads back to the church. Evil Minion pulls up to him, confirms his identity, and attacks; but he gets away and locks himself into the store.

Adult Sun-woo stops his car in traffic as he remembers getting stabbed, and registers scars on his arm and shoulder. Then Choi's goons arrive and there is a short car chase until Sun-woo looses them by pulling a fast U-turn on a busy street. When Chief Oh calls he asks him something we don't see. Then he calls Min-young to tell her he is going to try to stop the wedding. No one is happy; her mother has become a widow twice. The incense thing has never turned out well, but he still has to try as long as there is hope. He asks her permission and she agrees. He sets his watch, lights the incense, and disappears. [fourteenth time travel 17:38]

Evil Minion knocks on the glass door while young Sun-woo tries the phone, which unfortunately has been disconnected.

1993 Dr. Choi is finishing paperwork in his hospital office before going to the wedding when in walks adult Sun-woo with a baseball bat. As he recognises him as the witness from the night Dad died, 2013 Dr. Bug-eyes in his hospital gown remembers it. He now knows where Sun-woo is and gets dressed. He leaves the hospital, followed by reporters but not apparently the police. (I thought he was a prisoner?)

Adult Sun-woo ties up Dr. Bug-eyes with duct tape and finds his address book. He calls Evil Minion and orders Dr. B. to find out where his young self is. Luckily Evil Minion's car phone rings just as he is getting a hammer to break the door with. He reveals the store location and Sun-woo is so busy with his memory update that he misses the chance to have Dr. B. countermand the hit order. But he does say that it will be worse for Dr. B to lose twenty years of glory than to get killed. And he walks out.

Just as young Sun-woo is wondering if he is safe, Evil Minion pops in front of the door with the keys he had dropped in his panic. He backs away and throws things at the attacker, but just as Minion makes an impossible-to-dodge swing with the hammer, there is a commercial. No, adult Sun-woo shows up and takes over, and it is hammer vs. baseball bat. When Minion gets knocked out, Sun-woo gives his younger self an assignment. We don't hear what that is either.

Sun-woo sends his younger self in a taxi to the police station with another copy of the videotape, saying it is about the hospital fire, and that his father dying was an accident. He promises him he will have a good life and be happy. Another call comes to the priest's office for Jung-woo, and adult Sun-woo tells him he is the witness and has given the tape to his brother. Jung-woo can either marry and run away or stay and pay for his crime. [37:48] Sun-woo looks at his watch; there are five more seconds. He waits in the phone booth in the rain for a time jump.

Sun-woo's friend calls Chief Oh with the news that Choi is on the loose. Chief Oh remembers Sun-woo asking him an hour ago where he had been on that day in 1993 and what his pager number was. And had added that he had the most integrity of anyone he knew. Flashback to April 24, 1993, 11:55 am. Then-reporter Oh with long hair and horn-rim glasses is arguing with the police chief about covering up a case. He says he had watched something. Is it the same case? Adult Sun-woo had told younger self to go to Reporter Oh for help, and he was often at the police station. As Reporter Oh is leaving, a clerk tells him someone wants to talk to him.

Back at the church the wedding is beginning. Jung-woo comes out of the priest's office and hesitates before the chapel doors.

At the police station, young Sun-woo introduces himself to Reporter Oh.

Dr. Choi rifles his trunk for a golf club and is swinging it at Sun-woo's car window, when it disappears with a dribble of smoke. As Dr. Bug-eyes stares at it, his aides disappear in a similar way, as does his car.

Adult Dr. Han paces nervously when he is suddenly stopped by a new memory change. Adult Min-young registers something as well. The wedding guests start looking for the groom, but only young Shi-ah checks the front door. Young Jung-woo gives her a look and then continues walking away.

At 12:00 Adult Min-young sees the mourners disappear, then the photo of her dad, and then her mother. She realizes she is standing outside the church in a wedding dress. The announcement board reads Groom: Park Sun-woo, Bride: Joo Min-young. She sees her mother in a lavender hanbok with a smile on her face. Lucky her, at least she knows what is going on. Everyone else has been dropped into a different timeline without noticing.

Is it a new timeline or just the original one again? The first big change was the wedding between Sun-woo's brother and Min-young's mom, and that has been put straight. However, this time around Jung-woo and Choi are going to be caught by the police. So it's a new timeline.

I'm pretty proud of Sun-woo for asking Min-young's permission to change things and to let her know what he was up to. He cares about what she thinks, which is a change from the beginning of the show when he was blowing her off. The sad thing is, he was trying to make his brother happy but it didn't turn out.