Nine Episode 16: Choi Gets a Turn 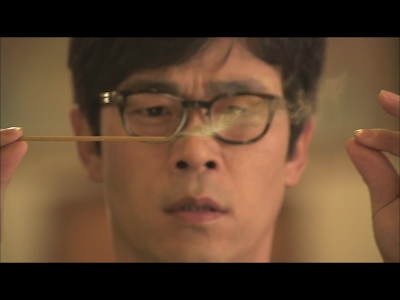 Sun-woo sits in a church trying to pray, when Dr. Han enters with the news that his brother, Jung-woo, has passed away. Sun-woo stalks out in a fury intending to kill Choi, but Dr. Han won't let him. Dr. Han takes the incense back into the chapel and decides to grind it to powder so it can't be used by anyone. He declares that it's not Dr. Choi's fault; the incense has not made anyone happy; hyung would have been better off dying in the Himalayas than going the way he did. He holds up the incense stick, saying if it is evil, the Lord will help them get rid of it. To his amazement, it dissolves with time-travel style smoke along with the case. (The smoke is a hint, guys.)

We jump to the next day, April 24, 2013, at 10:00 am; with Dr. Choi riding in a car and his aide reporting that Sun-woo had been at the mortuary all night. People are paying their respects to the family there, and a funeral is planned for the next day, so it will be hard to catch him alone. The aide has Sun-woo's phone record (where do they get these things?) showing a text half an hour before the knife attack, saying he is going somewhere and if things work out, “It will all be back in place in 30 minutes.” And a reply from Dr. Han wondering if Choi knew about the incense.

His boss, Chief Oh,  comes to the mortuary with news that Choi is going to prison. They don't have banks of flowers and displays of fruit the way you usually see; there is a bouquet and a Catholic crucifix and statue. But they still have food for the mourners.

Dr. Han calls Sun-woo out. He has a theory that neither the incense nor Jung-woo were of this world; they belonged to the past. He thinks the incense disappeared because Jung-woo died. Sun-woo thinks back to Choi saying in the hospital that if he could go back in time all he needed to do is kill one high school kid, and says it's more likely that a person interfered than that God did. He thinks it disappeared because of a time change. Flashback of someone taking the incense out of the closet, juxtaposed with it disappearing out of Dr. Han's hand. Yup, that was it!

Min-young stands in front of the altar remembering Jung-woo calling and thanking her for choosing him as her father. She tells Sun-woo that she had thought she could stick it out and things would get better, but she didn't think her father would do this. She asks him to change things but he can't because he's lost his last incense stick, and she dissolves into tears. She must have really loved Jung-woo as her father, because we never saw her mourn her Boston lawyer step-father.

Meanwhile back at the court house, three judges enter and begin to read Dr. Choi's indictment.

April 24, 1993, 10:00 am. The housekeeper comes to the gate [21:10] and hands the incense case to the same policeman who took Jung-woo's evidence. We see she had gone into young Sun-woo's room while he lay there asleep, and taken it from the closet. Argh! Why didn't he wake up? The cop claims he needs it for the investigation and asks when Jung-woo is going to America. She tells him it will be later that day, after the - subtitles say graduation, I think it should be wedding.

Back to Dr. Choi in the dock. He suddenly goes bug-eyed again as he is flooded with new memories. Exactly twenty years ago to the minute, the policeman is handing him the incense case, saying he doesn't know how that video tape was made. The only odd thing he could find was this incense, so he brought it. It had fingerprints of the younger son, but is the only thing that could have belonged to that witness. Present Dr. Choi immediately connects it with the text from Dr. Han about incense. Past Dr. Choi opens the case to find two incense sticks. There is also a note written by young Sun-woo, “It's not mine, so it must be yours. I will keep it well for the next twenty years.”

Present Choi realizes that the incense was from the future and collapses as he tries to remember where he had stashed it – right as the judge is giving him ten years. Sun-woo's friend from work, who was at court, calls to tell him that the trial has been adjourned. In the ambulance, alone with his aide, Choi suddenly opens his eyes, tells the aide where to find the incense case, and fakes unconsciousness again. (Why aren't any EMTs there, hey?)

Sun-woo remembers Choi standing outside the ICU claiming that he could find out everything, even in prison. He figures that Choi has suddenly remembered that he somehow has the incense, and heads out to the hospital to try to stop him.

The aide finds the incense in the same 92-2000 box in the archives that the CCTV picture had been in. He brings it to the hospital room and Choi chases everyone out. Here's the thing. Young Sun-woo had a case with two sticks saved in his closet. As an adult he used one of them. But Choi has a case that was taken in the past when it still had two sticks. That is why he opens the case and sees two. But when he lights one of them it burns down instantly without any time travel. That's because Sun-woo had already used it in episode 12, when he took the videotape to young hyung and got stabbed. In my opinion, since the cop got the incense back, it should not have been in the closet all those years, and Sun-woo shouldn't have gotten ahold of it.  But the writers decided that since the witness was a time-traveler who shouldn't have been there, the cop looking for more information about him counted as a timeline change.

Dr. Choi gingerly lights the last stick and watches it burn normally for a few seconds, when it suddenly disappears. [thirteenth time travel 34:00] He looks around to see that his hospital room has changed and there is another patient in the bed. We see split-screen that the incense stick is lying on a table in the present-day hospital room. Choi sees a calendar on the wall that confirms it is April 1993. He calls his office, gets Evil Minion's number from the nurse, and sends him to kill young Sun-woo.

Adult Sun-woo runs through the hospital and beats up the security men to get in to see Choi, without being noticeably bothered by the wound in his side. (It's been two weeks.) He sees the burning incense stick and snuffs it out, which causes Choi to be sucked back into the present. Sun-woo tucks the incense into his jacket as security hustles him out. Choi smiles, satisfied.

Sun-woo runs back to his car for the old diary and finds April 24, 1993 was his brother's wedding. The entry says that he was busy in the morning and then ran an errand for his brother and missed most of the wedding, which was at noon. Neither he nor Dr. Han can remember what went on that day since it is the alternate timeline, and they only remember altered events as they happen.

Young Sun-woo is walking slowly down an alley in the rain when Evil Minion drives up and talks to him. Adult Sun-woo is driving when he sees a scar growing up his arm and suddenly remembers being attacked, but not where. Young Sun-woo backs away from Evil Minion with a big slash on his arm.

Here we have two conflicting timelines. (1) The incense sits in the closet until Sun-woo gets it in episode 12. (2) The cop gets it and it sits in storage until Choi's aide gets it in episode 16.  The time-travel trip Sun-woo made with the first stick could have been negated since he didn't have it in the new timeline. He wouldn't have taken the videotape to hyung and he wouldn't have gotten stabbed. But the stick just dissolves for Choi because it has already been used. So this is a residual effect, like keeping injuries and objects you had before the timeline changed. Once the incense has been used, it has been used.