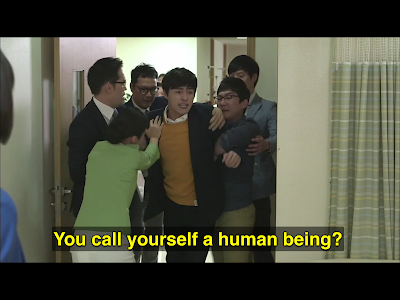 Sun-woo wakes up in the hospital to his phone ringing. Since it is the nurse calling about Min-young, he knows the timeline hasn't changed. He calls hyung to find they were thwarted by Choi, who had bribed the police. We see hyung turning in the evidence tape and going home to see young Sun-woo and Young-hoon (with doughnut all over his face!) And then Choi showing up to threaten hyung and destroy the tape.

Young Dr. Boyfriend gets Min-young's phone traced (how?) and finds her at Sun-woo's house with the nurse. Seeing her in a man's shirt, with her clothes cast on the floor, and the Record from the Past on the nightstand, he realizes he has been had and takes off in a taxi. Sun-woo is getting dressed and ready to leave the hospital when Young Dr. B walks in and pastes him a couple.

When Dr. and Mrs. Han meet for lunch she tries to tell him the hospital gossip about Min-young and Sun-woo. He has a cow and walks out. He doesn't explain to her; there's no way she could understand him.

Sun-woo shows up for work about a week later to find that nasty rumors have been circulating. Min-young cancelled her wedding and has been apologizing and returning gifts. Chief Oh tries to prevent them from resigning, so they meet in a glassed-in conference room to talk. She tells him he's big news and can't quit, so she will instead. Dr. Han has told her about the incense sticks, and she has figured out he was the man who took her mom to the hospital when she was little. She doesn't want the last incense stick used because her Dad might disappear; she just wants to stay as family. (Do all Korean companies keep file boxes on hand for employees to use when they quit?)

The people around them are taking it hard. Min-young's mom wants answers which she can't give without implicating Sun-woo. Their boss feels betrayed and let down. Sun-woo cries and stares into space. Min-young cries and then puts on a cheerful face for her mother. At this point, Sun-woo, Dr. Han, and Min-young all remember the alternate timelines. Dr. Choi got a new memory in episode 11 but doesn't realize it is from an altered timeline. No new time travels or changes this episode.