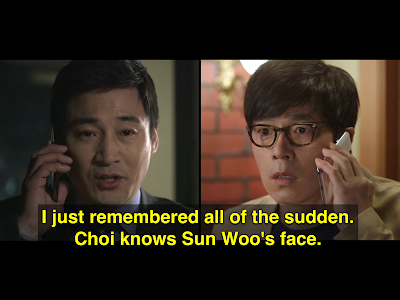 We pick up on April 10, 2013, at 10 pm with Dr. Han being nervous and hyung calling him to warn him about his new memory that 1993 Choi has a picture of Sun-woo. But Sun-woo has already set his watch for 30 minutes and lit the incense. Exactly twenty years in the past, Choi is showing the CCTV picture to hyung and saying they have to get rid of this guy.

In 1993 Sun-woo walks into Yoo-jin's record shop and young hyung recognizes him. Present day hyung cringes as he now remembers himself phoning up Choi. A suspicious Sun-woo listens in on the store extension, hears Choi telling hung to stall, and takes hyung's car keys from the counter. He finds the car and puts the VCR tape in the glove compartment; and then Evil Minion shows up and they recognize each other. A car chase ensues, but Sun-woo eludes him and finds a phone booth. He calls hyung and tells him he will never be happy [17:40] but will end his own life - December 31, 2012 according to the subtitles. (Wait. Didn't he die in the Himalayas in January that year?) As he is telling hyung about the videotape, Evil Minion opens the door and stabs him. There must be something about phone booths. As all this is happening, hung is simultaneously remembering listening to it. The fight in the phone booth is followed by another car chase, which ends on a bridge. With one minute left on his watch, Sun-woo jumps into the water, knowing he will land in his own time. [25:30]

Back in the present, his co-workers find him on the floor, wet, in a pool of blood. The news goes on without him while the staff speculate about Choi being behind it. A friend who goes in the ambulance calls hyung, who tells them to check for water in the lungs. When Dr. Han calls, Sun-woo is able to tell him that Choi knew his face and is doing different things from before.

Present-day Choi, looking through old files in a box labeled 92-2000, finds the CCTV picture of the man in the optical shop and sees that it looks like Sun-woo. [37:20]

Present-day hyung agonizes through new memories of himself talking to the minion and being afraid to confess. However, as Sun-woo is being wheeled into the OR he is able to report that his young self is heading into the police station.

As a result of Sun-woo taking his mother to an optical shop that had security cams, Dr. Choi now has his picture and is acting differently than before. Such as hiring a hit man. However, he does not remembering everything or realize there is an alternate timeline.