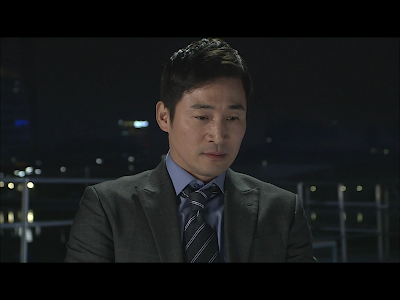 Sun-woo takes Min-young home in the car and she comes down with the dreaded Korean Rain Disease. He starts unbuttoning her shirt, when she asks if they first met in the ER. Flashback to him knocking her out by hitting her with a door and then taking her to the ER. He yells at her for being drunk and throwing up while she stares at him, mesmerized by his hotness. We return to him tucking her into bed wearing one of his shirts. She remembers her original lawyer stepfather in Boston. He offers to handle things any way she likes, continue as family, meet secretly, or go away somewhere and live together. She sleeps and he looks up to see the writing on his guitar starting to disappear. 1993 self is wiping it off and putting something new: Did you get it? What I sent you? He checks his journal for an explanation.

1993: Teen Sun-woo finds a package in his room [14:18] which the housekeeper says the police had left because it had his fingerprints on it. It's the burned incense case. Inside it are two unburned sticks.

2013: Adult Sun-woo looks in the closet and finds the case. He remembers that in 1992 he purposely left it on the table at the hospital, and now it's found him again. The adult is intercut with the teen leaving the incense in a box of mementoes and finding it.

At the hospital Young Dr. Boyfriend sits dejectedly. He tells Dr. Han that Min-young is missing, not admitting that she broke up with him. Sun-woo calls then to ask Dr. Han for help with the rain sickness. When he arrives Sun-woo tells him that he has the incense again, Min-young remembers, asks him to talk to her (thanks a lot pal), and takes off to see hyung. When Min-young wakes up, she asks Dr. Han if he knew. He says yes, and she asks “Why did you introduce me to someone, since I was already married?” So they really got married then. I wondered.

Dr. Han calls Sun-woo and tries to talk him out of using the incense any more, saying that it already shortened his life. Sun-woo admits that he is afraid, but counters that more people will get involved and he won't be able to control it. He thinks the incense chose him in the beginning and has returned because there is something he has left to do, but it might betray him. (Is that a hint?)

Dr. Boyfriend has just confessed his fight with Min-young to hyung and left his office, when Sun-woo arrives. There are several shots of hyung framed in the desk mirror. (Meaning he is not a real person but only an image?) Sun-woo tells him that he and Min-young are married and that hyung is not her father. Also that hyung had wanted to save their father's life and get his girlfriend back, but died a year ago in the Himalayas. Then Sun-woo hands him the incense, explaining it sends you back twenty years. [27:52] Hyung remembers Min-young in 1992 telling him she didn't know the person who gave her the phone number, and then remembers a stranger coming into his father's office that night. He had run off, but the stranger (who he now recognizes) had followed and suddenly disappeared. He remembers modern Sun-woo beating him up at the restaurant and afterwards calling him up and accusing him of making him lose his father and mother and his girl, deserting him, and then turning up dead. And it had made him waste time hating Dr. Choi, who has now become a monster and may turn out to be hyung's biological father. He wants hyung's agreement to go back and straighten things out. Hyung mopes around all day thinking it through. The top button of his shirt is undone; he's been loosening his tie and squirming.

We see Sun-woo's watch reading 2013, 10 April, 7:02, Wednesday. Hyung calls to say he believes the story. Does that mean he doesn't remember the original timeline yet? He regrets what he did bitterly and authorizes Sun-woo to go back and convince his younger self to turn himself in. Sun-woo doesn't want Min-young to pay for the brothers' mistakes. We see him uploading the videos he made the night of the fire, from a USB to his computer and onto a VCR tape. (It's run all the way to the right, which means it's at the end. heh.) Hyung asks if things will be ok and he replies it never goes the way you think it will. Hyung asks if his wife and daughter were happy in that time. He'll lose them now, but he wants things fixed before the wedding so it will be easier for Yoo-jin. And he wonders if this is his last day. He takes Yoo-jin out to dinner, drinking her in with his eyes. She mentions that their anniversary is in two weeks, so they have two weeks to change things before the 1992 wedding.

Sun-woo readies for the time jump in his dressing room at work. You'd think, to make best use of his time in the past, he would do this at Yoo-jin's store, where Hyung had told him he would be until 9 at night. But – spoiler plot reason – he will need to have help from his coworkers when he returns. At 8:00 he tells his assistant that he will be asleep for half an hour, locks the door, and sets the timer. Dr. Han texts him wanting to know what's up and to give a warning. He picks up the VCR tape, lights the incense, and disappears. [43:30] (twelfth time travel)

In 1993 hyung is minding the store when Dr. Choi calls him, with the photo of Sun-woo that Evil Minion had gotten from the optical shop security camera.

Suddenly 2013 Hyung, sitting at the restaurant table, gets a new memory flash of that scene.

“Tell me if you see this guy,” says 1993 Choi to young hyung, “or it's all over.” Hyung returns to the store and looks up to see the man from the picture right in front of him. Dr. Choi's words ring in his ears, “Tell me because we have to get rid of him.”