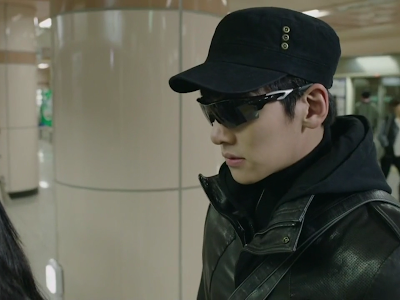 Happy Ides of March! It was two years ago today that Nampyeon and I started watching Korean Dramas. At the one-year mark I reviewed everything I had seen that year. Mostly they were older classic dramas that had finished airing. I looked on lists of people's favorite shows, and chose the ones with more fans and that seemed to have happy endings. Sometimes we agreed with the popular lists, sometimes not. Not until the end of the year did we branch out into some that were new and still airing. And then it was one that was heavily publicized. It really didn't make the grade, but by then we had discovered discussion groups. Bashing a bad show and sympathizing with everyones' remarks was almost as fun as watching a good show. Almost.

We saw an amazing lot of shows that year. Maybe because we hadn't been watching tv for a long time and were surprised that there was a long list of shows that actually interested us. We inhaled two or three episodes a night, more on weekends. Until we decided we were spending way-y-y too much time on this and cut down to one episode a day.

That first year we watched about 40 dramas. That is 40 mini-series, not episodes. This year we watched about half that. We also started a lot that we didn't finish. Some we only gave time for one episode before dropping, some we gave 10. But we learned not to watch something thinking it would get better, if we just didn't like it. There are too many out there for you to give your evening to one that bores or annoys you.

We have been clued in to which dramas and actors were popular, which got buzz, which tanked. Yes, we discovered that we weren't the only people that thought dramas tended to go downhill half way through. We started getting favorite actors and even remembering the names of some of them. Which is something when you consider how alien they seemed to us at first, just a collection of odd syllables recycled and interchanged randomly. We have kept an eye on new dramas coming out and had some catch our interest before they even aired. Some of these were because of an actor, some because of storyline. Some justified our interest and some were disappointing but we definitely had our own opinions.

It's time to post reviews of the last year's dramas. Luckily Nampyon kept a list of them all.

1. Scent of a Woman - A woman with a diagnosis of terminal cancer decides to go ahead and do all the things she had always wanted to do but was too hesitant to do. It is quite entertaining to watch, and not too depressing considering that diagnosis. ***

2. Dalja's Spring -  A career woman passes a younger guy off as her boyfriend and then begins to get fond of him. Full of silly escapades. It's well done, and I especially liked the way some of our first impressions of a major rival and an antagonistic boss get turned on their heads. Don't miss the wonderful solo at the ending party. ***

3. Secret Love Affair - A 40-year-old married woman falls in love with a 20-year-old piano prodigy. His sincerity causes her to reassess her messy life of power plays and unethical behavior. I was originally put off by the topic and the steamy promotional pictures, but was pulled in by the wonderful classical music and Yoo Ah In's believable piano playing. This drama was really well done and artistically shot, and is one of my favorites. *****

4. Lovers in Prague - A diplomat in Prague who happens to be the president's daughter meets a middle class detective. The love story is a bumpy ride due to ex-boy- and girlfriends and to their very different social classes, but both the main leads are endearing. An enjoyable watch. ***

5. Three Days - The Korean secret service has three days to find their missing president. It takes a lot longer than that but they don't point it out. Yoochun is good as a rookie agent and it's quite watchable despite a lot of plot holes. ***

6. Doctor Stranger - In what must be the worst hospital in the world they had a contest for best doctor; involving all kinds of shenanigans and coverups, including refusing surgery to patients. This is the most awful mess of a drama ever. It was however entertaining to watch the catfight between fans of the two female leads. Kang Sora's acting was so much better and her scenes with Lee Jong Suk were so cute, that people wanted them to end up together. *

7. Sly and Single Again - This was one of a rash of stories about exes getting together again. A woman divorces her nerd husband and then gets a job at his company when he strikes it big. His business partner likes him and the partner's brother likes the ex-wife. ***

8. King of High School - A high school hockey star stands in for his brother as an executive in a big company. There are lots of great secondary characters like the high school pals and the grandpa; and Seo In Guk is hilarious. My only problem is the idea of an adult dating a high school kid. It's a very cute show anyway and my 10-year-old granddaughter loved it. *****

9. Reply 1997 - Watched this partly for its reputation and partly for In Guk. It's a high schooler show where he and his older brother both like the same girl. She is crazy for kpop idols and pretty annoying. I was not won over. **

10. Marriage Not Dating - A salesgirl and a surgeon fake an engagement to keep his mother from pestering him to get married. It's pretty cute with a lot of great slapstick, but falls prey to the second-half slowdown. ***

11. Pasta - The new head chef in a posh restaurant turns the place upside down, changing things and yelling at everyone. A kitchen helper tries to make perfect spaghetti and get promoted to chef.  Lee Sun Gyun has a wonderful, resonant voice. ***

12. My Secret Hotel - Started watching this because of Yoo In Ah (not to be confused with Yoo Ah In) and the storyline of a body falling through the ceiling onto a wedding. It tanked pretty fast and became a very dull story of indecision. The only ray of light was the detective. *

13. Surplus Princess - A mermaid falls in love with a tv chef and kisses him when he falls overboard. She gets a potion from the sea witch to turn her tail into legs and has 100 days to get the chef to love her. This was a cute show, especially the sea witch, who was played by the same guy as the detective in Secret Hotel. Unfortunately it was not liked in Korea and got cut to 10 episodes when they had 9 already filmed. The storyline was supposed to have the mermaid chase after the chef only to fall in love with another man. Consequently the last episode is a hurried up affair. ***

14. The Three Musketeers - A cross between the famous novel and Korean history during the time of King Injo, written and produced by the people who gave us Nine Time Travels. The crown prince (Lee Jin wook, also from Nine) with his two pals tries to improve Korea's relations with foreign powers while his father the king continually messes things up. Into this walks Jung Yong Hwa as D'Artagnan, the newbie but excellent swordfighter, impressing everyone by his improved acting skills. This was intended to be the first of three parts, but the other two got cancelled. The drama was good except for some big plot holes in the latter third. ****

15. Blade Man - Promoted as the story of a superhero who sprouts knife blades when angry, this morphed into a melodrama where the female lead helps him control his anger, and then the whole thing was hijacked by The-Return-of-the-Not-Dead-Wife like The Prime Minister and I. It was cute until then. ***

16. When a Man Loves - A melodrama about a man who rises from a gangster background to become a successful businessman. He and his protege both fall for the same girl, who strings them both along. I don't actually know why either of them would like her. **

17. Misaeng - Interns in a large trading company struggle for success and acceptance in a hostile business culture and against their bosses' prejudices. I picked the show up because of Kang Sora and the opening scenes in Jordan. It was taken from a popular webtoon and really struck a chord with Koreans for being so true to life. One of the best shows ever! *****

18. IRIS - Two friends are recruited together as secret agents. They work sometimes together and sometimes at odds, falling in love with (you guessed it) the same woman. One of them is injured on a mission to Hungary. He is betrayed and pursued, and finds help where he least expects it. Suspenseful and enthralling with a tragic ending. *****

19. Bride of the Century - A woman becomes engaged to the oldest son of a wealthy family and then finds out about a curse that the first wife of the oldest son will die young. Her brother finds a girl who looks just like her, and they plot to substitute this girl to beat the curse. The best part of the drama is the ghost who shows up from time to time to help or scare people or otherwise move things along. Engaging leads, very cute. *****

20. Pinocchio - A fireman is killed in a factory explosion and a female reporter pins the blame on him and ruins his family. Later, her daughter becomes a reporter and helps the son of the fireman to uncover the secrets behind the fire and restore the fireman's good name. ***

21. Ghost - A genius computer hacker and his policeman friend, both investigating a murder, are injured in an explosion. The policeman dies, but a policewoman helps the hacker get reconstructive plastic surgery to look like the dead man. Together they track down a web of murders and bribes. Extremely well done and engrossing. *****

22. The King's Face - Set during the time of King Seonjo, face reading is like astrology and the king has been told his face is not propitious. Maneuvering for power, he kills the family of the girl Prince Gwanghae loves, and she spends the rest of the show with a sour face.  It gets interesting during the Japanese invasion of 1592 and we get to enjoy all the beautiful sets of armor. After that, more jockeying for power. ***

23. Healer - A night courier who does any job short of  murder for a price, steals DNA samples from young women until he locates the target. He rescues her a couple of times and then fall for her. They find that their lives are linked in a tragic past which his manager, Ahjumma, helps them discover and overcome. She is the coolest female geek ever. This show has heart and was SO FUN to watch. *****

24. Kill Me, Heal Me - A man with a split personality meets a psychiatry resident whose brother writes mystery novels. They both have childhood amnesia. The brother has researched their secret pasts, which seem connected, and arranges a meeting. They unravel things together as they regain their memories. This drama seemed like it would be a real bomb at first, since two other lead actors turned it down. But Ji Sung did an absolutely wonderful job of bringing the personalities to life, and captivated the audience. Fascinating! *****
Posted by Telzey at 7:38 PM