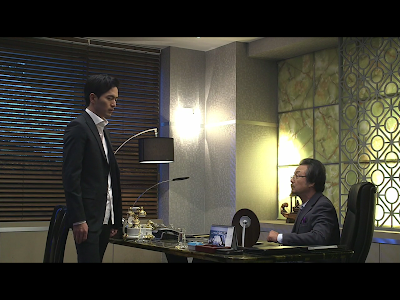 
Sun-woo appears in his 2012 car, hyperventilating. 1992 hyung looks up, amazed that the madman has disappeared. Sun-woo drives straight to the restaurant where hyung is and procedes to beat the crap out of him, and then collapses again.

Min-young reads the news. They say again that it's the 31st and the last show of the year. That doesn't really fit with being the night of Dad's death, which was the 30th. Usually. She gets permission to read Sun-woo's prewritten closing because it was his last show. It says, “History of mankind proves that the arrogance of a man, of believing he is the only one who could change the world, has led many heroes to their doom.” If that's not a comment on the drama I don't know what is. And I loved it when the two staffers complained that Park Sun-woo was their boss' favorite and could get away with anything. Hahaha!

They take Sun-woo away in an ambulance but he pulls the drama trick of ripping out the IV and running off. He calls hyung and yells at him for lying for 20 years. Hyung says that Mom would not let him take the blame. Tears.

Sun-woo retrieves his car and drives to the hospital again to light an incense stick for the third time that night. [eleventh time travel - 15:45] At 1:30 he walks into the office, empty except for Dad lying on the floor in a pool of blood. More tears. He retreats to the break room to review the recordings, and watches Dad accuse Choi of being hyung's father. Mom slaps Dad, Dad slaps Mom, Dad strangles Mom, Mom shouts. Sun-woo can't look, and we don't see it either.

Choi comes in to start the cover-up. Hyung goes back to his girlfriend's house, lets himself in, and crawls under the blanket with her and her daughter as they sleep. 2012 Hyung staggers into his office for more propofol. 1992 Evil Henchman comes in with gasoline and starts the fire as Sun-woo watches on his screen. He suddenly recollects his teen self should be showing up soon and is outside by the time the kid arrives. We see him blown back by the blast again.

Back in 2012, Sun-woo visits Dr. Choi to apologize for suspecting him of murder and accuse him of arson and blackmail. He gives Choi a thumbdrive and warns that he hasn't hit the bottom of the sea yet. We view that remark through a panel of glass with a wavy mark cut in it. Nice. Choi watches the video, the one of himself threatening hyung, incredulous.

December 31, 1992. Teen Dr. Han tries to call Sun-woo but can't get him. He suggests to the girls they cancel the train trip, and one of them leaves, but Future Mrs. H. won't let him off. She totally makes the two-fingered curse gesture she makes in 2012 and drags him off with a grin on her face. Ha. She's already got him around her little finger.

Presumably the same day, 2012. A distracted Dr. Han drops his kids off at school. He gets a message purporting to be “the last message” from Sun-woo, acknowledging the incense is a curse and refusing to tell what happened. We are shown the cops in the burned-out room and then the scene from the end of episode 7 as Sun-woo walked into the office to see his dad on the floor. The message cuts off and Dr. Han leaves his wife on the sidewalk and races off to Sun-woo's house. No one answers at the gate, so he totally scales the wall. Go Dr. Han! And then he can't bring himself to jump down so he walks the wall to a better spot up the hill, lol. Inside, he finds Sun-woo passed out on the floor again, with pieces of his phone around him. Why? Despair? Dr. Han puts him to bed and gets the news that the incense sticks have been left in the past. Aww...

Min-young shows up and Dr. Han lets her go upstairs. That white sculpture looks like it was made hastily of mat-board. He calls Dr. Yoon's office, who I assume is a brain cancer specialist, while she goes in and puts the room to rights (because Dr. Han had made a mess looking for the incense). Sun-woo wakes up and we get another famous conversation.

I love that. It strikes me as hilarious.

There is a last shot of the incense case in the fire. Everything around it is burning but it isn't because guess what? It's made of metal. And it's fireproof. There was a new time travel but it caused no changes, although Dr. Choi is getting some ideas. But no decisions have been made yet, so it's still the same time stream.