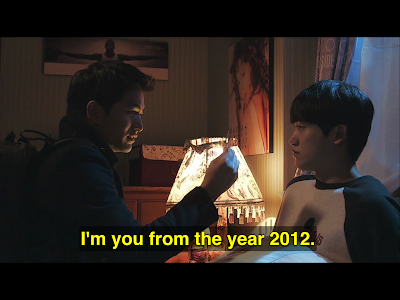 December 30, 1992, 10:30 pm. After a quick view of Dad at his hospital office saying goodnight to the nurse, we pick up where we left off at Sun-woo appearing in his younger self's room. He pulls out his ID for proof of who he is, and asks teen self to call Dad and get him to come home. Originally Dad had been killed in a fire in his office and he wants him to get out of there. Here we get a new time line, because the intervention changes something. Teen self yells to Dad for help but gets knocked out (and a cut) in the resulting scuffle, and Dad heads for home. I would have called the cops. I guess it's not far though, because adult Sun-woo takes the family car and they pass each other on the road.

Sun-woo sets up the cameras in Dad's office and calls teen self to get him to keep Dad at home. They need to meet the next day and he'll explain how to save someone's life. Then he watches on his computer as hyung walks into the office. He's completely shocked.

Dr. Han in 2012 waits impatiently, looking at an article on his computer about Dr. Dad dying in the fire. It dissolves in smoke and reappears unchanged except with a time four hours later. Now we have Present3. Sun-woo reappears in his own time in his bedroom again. Interesting. He doesn't reappear in the place he was at, but in the place he left from. Min-young had gotten a lock-smith to get the door open. Sun-woo is curt with them and heads to work.

Teen Sun-woo remembers suddenly that he was supposed to keep Dad home but Dad has gone back. He rides his bike over to the hospital, opens the office door, and is blown back by the flames.

2012 Sun-woo at work walks past a clock showing 11:30. He calls hyung to ask what he was doing the night Dad died but hyung doesn't admit anything. In 1992 we see medics bringing Dad's body out of the hospital in the daylight the next morning. Back in 2012 Sun-woo broadcasts the news for December 31. Dr. Choi texts that when he got to the hospital on that fateful night at 12:30, Dad was already dead. The fire was at 2 am.

This is bad news for Sun-woo because if Dad died before 12:30 he doesn't have much time to fix it. He deserts the anchor desk and beats it over to the hospital. At 12:20 Dad of 1992 walks into his office and argues with hyung and then with Mom when she arrives. He drops the bombshell that hyung is someone else's son.

Sun-woo arrives in front of the hospital, lights incense, and disappears into 1992. [tenth time travel: 41:09] It's 12:28. He hears Mom scream and runs into the office to see Dad dead on the floor with hyung kneeling next to him. Mom claims it's an accident as hyung hightails it out of there. He nearly gets run down by Dr. Choi, who sees the blood on him. Sun-woo chases hyung down, and catching up to him in an alley, grabs him by the shirt, ready to do mayhem, but disappears into 2012 as his time runs out.