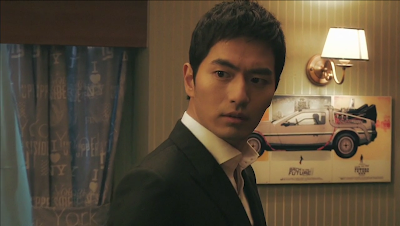 We open with Dr. Han running an ER and getting after a couple of interns for watching Dr. Choi on tv. One of them is Kang Seo-joon, played by Oh Min-seok, who we remember as an assistant manager from Misaeng. He is going to be Min-young's boyfriend. Min-young calls Dr. Han and he tells her about the tumor. Speaking of which, we watch Sun-woo painfully endure another sudden headache. Then he notices the incense stick and lights it again. [second time travel - 13:45] He tries to use his phone but has no connection.

When he looks around, his room has changed to the way it was when he was in high school, featuring a poster of the DeLorean from Back to the Future. He finds a pager and has a run-in with his Mom, who we have seen as a catatonic mental patient; his Dad, who died when he was young; and a teen-age hyung, who swings a bat at him. A huge fish tank breaks and he is cut by the glass. Dazed, he returns to his room, only to have his phone beep and his room turn back to the way it had been. The incense has gone out again, but he still has the cut. Sun-woo has visited 1992 and changed history. The fish tank gets replaced by a modern sculpture and his family remembers an intruder. They are in Timeline Past2 now. He has a pager in his pocket and a sculpture instead of a fish tank in his house.

He goes to the ER for stitches and gets a lecture from Dr. Han, who wants him in chemo stat. At work, he takes a call from Min-young in Nepal, who is angry at him. His housekeeper is dusting his room when the pager goes off. [a time incident, not a time travel – 36:52] He has her send it to him and asks a techie to find out how old it is and who had the number. He talks to Dr. Han on the phone about seeing things when the incense stick is lit and wonders if it is a drug. It would be pretty lame if the whole show were a hallucination caused by the brain tumor or a drug. A courier delivers the pager and incense stick, which he lights. [third time travel - 42:22] We get a split screen as he looks around the room in its 1992 décor, and the tech enters in 2012. Same space, different times. The tech doesn't find him and leaves. Our guy is freaked out to find a newspaper dated December 21, 1992 and when the pager rings again he calls it back on a desk phone. The person answering is his teen-age self wanting his pager back.

The pager ringing is a puzzle. The first time it rings, teen Sun-woo is calling it from 1992, so why does the signal register in 2012? It was not caused by the incense, at least it wasn't lit. Are we saying electromagnetic signals travel across time? The second time it rings it makes sense because the pager has gone back in time with Sun-woo. Some of the group members feel it may be that since he had owned the pager, he has a personal connection; and that it works because the required tech support is there. Or that since this show was written by the writers of Queen Inhyun's Man, it may just have similar mystical telephones. Perhaps it is just the quirks of a mystical power, and we are expecting the well-ordered working of a machine built by Doc Brown.