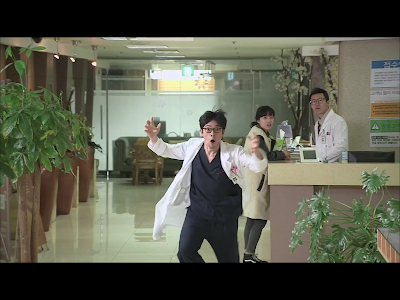 Sun-woo leaves incense burning in his car and goes off to reconnoiter his dad's hospital of 1992, where he runs into Dr. Choi. [fifth time travel – 2:00] After that he sees hyung getting sloshed over losing his girlfriend and takes him home. He is first amazed to see dad alive, and then amazed to find that dad is harsher than he remembered. The incense runs out just as they are carrying hyung into the house and he disappears.

December 24, 2012. In one of a trio of brightly painted town houses, Min-young wakes up jet-lagged. She and Sun-woo exchange cute text messages and she reviews pictures of them together in Nepal, in one of which she is shown sporting the fur-trimmed parka from Sun-woo's phone screen in episode 1.

December 24, 1992. Teen Dr. Han finds a Christmas card on his desk at the study hall. [sixth time travel – 13:57 – although we don't see it happen, just the evidence of it] It is from Sun-woo and says he will get mail on that date in 20 years at 10 am, and then he will know what that card means. It's got a 2012 copyright mark. Back to Dec. 24, 2012. Dr. Han gets an email from Sun-woo right at 10 am telling him about the time travel incense. He remembers the card and does a creditable impression of Doc Brown running through the halls screaming. Haha! I thought he was totally overacting until I got the connection. He runs (literally, because he's out of breath) to Sun-woo's office for an explanation. He wants brain scans from age 30 on. Sun-woo thinks it will be hard to convince his past self. He decides to do what hyung had wanted to do first: get back his girlfriend and save their father. Sun-woo remembers opening the door to his father's office and being blown back by the blast; the entire room was in flames.

Sun-woo uses an incense stick to go talk to the girlfriend [seventh time travel – 24:15] but finds she had OD'd on drugs. He gets her to the ER and gives hyung's phone number to her eight-year-old daughter, Shi-ah. When he disappears the camera tilts 45° and I am sure this time we will get dire consequences.

Sun-woo and Min-young meet for dinner, but he gets a call about visiting his mother at the care center. He suddenly remembers he had stood her up on Christmas Eve in 1992 and runs out, promising to be back in half an hour. He had been supposed to go out to dinner with his mother and lied to her so he could go to a movie with a girl he liked. Mom had decided to go too and seen him there. This time [eighth time travel - 37:55] he steps on her glasses and takes her to a nearby optometrist for new ones. Into her purse he slips a heart necklace, that we later see she is still wearing at the care center. He returns to the restaurant majorly pleased with himself, and Min-young remarks he must be close with his mom. She is not, because her mom is difficult. She even had to change her name twice because of her mom; it used to be Shi-ah. Split-screen to watch 1992 Shi-ah dialing hyung's number. When he answers, we see 2012 Sun-woo's shocked face as Min-young disappears right in front of him. I am pretty shocked too; but seeing the preview for the next episode, where hyung wearing a doctor's coat walks up to Dr. Han with a smile on his face, leaves me with a lump in my throat.

Usually in time-travel stories any changes that are made in a visit to the past are felt immediately in the future, but in this show things don't work that way. They change in the parallel moment twenty years from when someone in the past makes a decision that will cause the future to be different than it was the first time around. Hence, when Sun-woo returns from his seventh visit to the past, his world seems unchanged. It is not until young Shi-ah makes the phone call to hyung and he decides not to break up with her mother, that a change is seen. Min-young disappears in a puff of smoke and reappears in a new life; her mother disappears from a life with her second husband the Boston lawyer, and hyung disappears from the dead and has a new life as head of the hospital.