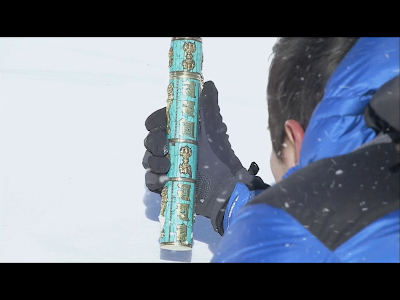 We backtrack a teeny bit to watch Sun-woo light the incense again. [third time travel - 00:55] We hear the tech call his name, sounding odd, like a monk chanting, or as if from a Doppler effect. The news team has a cow about their missing anchorman while Sun-woo looks around 1992 curiously. In 2012 someone runs in to grab a case sitting on the counter by the incense holder, knocking it over. Sun-woo in 1992 has called the pager number and had time to figure out he is conversing with his teenage self before the 2012 furnishings rematerialize around him and he sees the incense stick lying on the floor, the ash knocked off and no longer burning. The tech verifies that the pager belongs to the study hall Sun-woo had attended in high school.

Sun-woo calls Dr. Han to exclaim over the whole thing, and they both remember that the pager had been lost. We see a flash-back of the two as teenagers talking it over. Teen Sun-woo goes home and tries to tell hyung, but is brushed off. Hyung is preoccupied with telling his girlfriend goodbye because his father doesn't approve of her. Teen Sun-woo writes it up in his journal while adult Sun-woo reads it. He remembers writing it, but of course it is a product of time change and was different the first time around. Here we have one of the rules: 1992 and 2012 are marching along in parallel, and what gets changed in 1992 doesn't affect 2012 or even get remembered until that parallel moment rolls around exactly twenty years later.

Sun-woo thinks about hyung wanting a return to the past and reads the little notebook that was found with the body. We get a flashback of hyung on the plane going to Nepal. It's January 5, 2012. He writes in the notebook, “Maruna Lodge room 201, under the window side mattress. Nine incense sticks that he left.” Sun-woo chews that over and returns to Nepal to look for Maruna Lodge. It had been torn down ten years previously, but he finds a guide to the spot where it had been. Split-screen shows us that he is indeed following hyung's footsteps and we're told it's December 22, 2012. We see (flash-back - 25:22) in a darkened empty cafe, a bearded man speaking English, telling hyung that someone had used the incense to save his family and not needed nine additional sticks, which could be retrieved. The bearded man dates that as 1992 and they were then in January 2012, so it had been 20 years since that man had gone to the Himalayas. It is after this interview that hyung flies to Nepal. It seems that the bearded man was not in Nepal, or in Korea either, or they would have been speaking Korean.

The thought crosses my mind that the man who only used one incense stick could be Sun-woo in a different time loop, but there is no way to know. Hyung wrote in his book that the incense stick is 30 cm and burns for 30 minutes. This must be information from the bearded man. We are told their father died December 31, 1992, so hyung in January of 2012 would have had time to do something about it using the twenty-year jump.

Sun-woo dictates a message to send Dr. Han and hikes up out of a forested area through dead brush and then to a bare snowy hillside. He lights his incense stick (he has ten minutes left on it) and disappears in a puff of smoke. [fourth time travel - 29:40] He reappears on the terrace of the Maruna Lodge twenty years previous, but surprise! It is surrounded by green trees and not a snowy waste at all. This I attribute to an oversight on the part of the production team, because it has to be December in both cases, and the surrounding vegetation should be the same. There is even a 1992 November-December calendar on the wall. Or wait – maybe the lodge had been watered by a hot spring. Are there hot springs in the Himalayas? At any rate, Sun-woo finds a beautiful turquoise lacquered incense case but has to fight it out with the locals. He luckily has hold of the case when the original incense stick burns out and returns him to the present, bringing a record album that was in his hand as well.

He buys a turn-table and is listening to the record when Min-young walks in. She tries to act cheerful and refers to the three month marriage, but he acts skeptical until he suddenly gets up to lock the door and pull her in for a kiss. After tipping her over onto the bed in the approved swoony manner he tells her he wants to extend the three months to thirty years. He ends his message to Dr. Han by saying, “Believe in the fantasies you want to believe. Love the girl you want to love.”