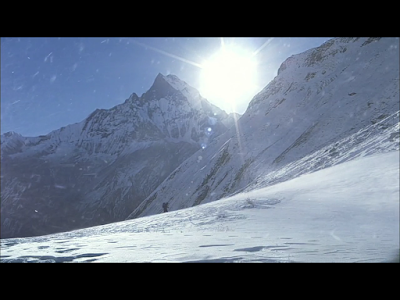 I belong to a kdrama facebook group that has decided to watch Nine: Nine Time Travels together. I loved that one, and scoured lots of blogs looking for a good explanation of that confusing and ambiguous ending. Yay for talking it out with people! If I ever get a chance to meet a celebrity, I'm going to choose writer-nim and ask her exactly what she meant by that ending. And now that I'm going to rewatch, I'm going to keep track of all those crazy timelines.

The very first scene may be a clue. We have a shot from the air of mountains covered in snow. According to the story they are meant to be the Himalayas, but you couldn't tell them apart from the mountains of New Zealand. Especially since music from Lord of the Rings is playing. I am already happy, because I think it's a clue that this is a fantasy. We see someone who turns out to be hyung walking up the mountain accompanied by an epic elf chorus and then a flute. (The hobbit theme is played by a flute, but this is a more somber song.) He tries to light a stick of incense but falls and starts to freeze to death and we hear footsteps; someone's shadow falls on his face and he looks up.

Change scene to our hero flying into Pokhara, Nepal, on December 15, 2012 (yay for a firm date). He's unshaven, which might be important later, and greets the heroine with a surprise smooch only four minutes into the show. They bicker and he teases her. He's kind of a jerk, but not your standard kdrama chebol jerk. He asks her to marry him for six months. Then he goes to the police station, where they give him hyung's belongings and say he died a year before. What? Hyung is dead? Didn't we just see him get rescued? That first scene didn't have a time-stamp on it and could be a sneak peak at the end of the show; otherwise how does it fit in?

In a flash-back dated a year ago (December 2011, and presumably just before dying in Nepal) hyung meets Sun-woo in a cafe in Seoul, needing money and hinting that he wants to return to the way things were back when their father was alive and their mother healthy. He is very nervous and looks a little unbalanced, and says if he told Sun-woo the whole story he wouldn't believe it.

We have seen Sun-woo cringe in pain and take pills on the plane; it happens again in the hotel, but he keeps Min-young from noticing. He tells her he likes her because she is always so cheerful, and won't let her commiserate about his brother. She argues with him about the six months business, why not longer? He claims he will be busy, lowers it to three months, and tells her that he is going home the next day. Later, trying to get some sleep and failing, he notices an incense stick that was found with his brother. He lights it and lies down again, only to find himself lying in a snowy waste. (First time travel: 30:30.)

When he gets up he is in his room again, but we see that the burning incense has hit the edge of the holder and gone out. He thinks he was hallucinating, but it seems to us like time-traveling. Except. The rules of time-travel weren't followed here. In every other case he gets moved back twenty years but doesn't change location. This time, he was either moved, or the hotel hadn't been built yet. But it's in town, surrounded by green trees. It could be that in changing owners, the incense stick sent him to the last place the previous owner had tried to light it - where hyung had been. Or it could have been a warning sent by the magic. In either case, it seems to be hiccuping and having a hard time staying lit.

We skip to a few days later. Getting ready for a tv interview, Dr. Choi says he thought Sun-woo was abroad and is told he had been back for over a year. During the interview he goes off-script to ask Dr. Choi some embarrassing questions about his research. Everyone is upset. His boss endearingly stands up for him to the network brass, but yells at him and suspends him. Sun-woo hands in his resignation and we discover that he has a brain tumor, with six months of normal life left. (Hence the six-month marriage.) He asks Chief Oh to keep pushing Dr. Choi and gives him a thumb drive with evidence on it.